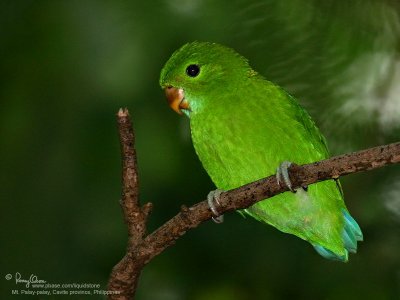 Listen to the sound of Mindanao Racket-tail

This species is listed as Near Threatened because there are some indications that it has a moderately small, fragmented population within a restricted range, which is undergoing some decline owing to habitat loss. However, little recent data is available about the population size and structure of, and threats to, this species. Further information may indicate it is more threatened.
The notion that it is local and uncommon, apparently occurring at lower density than some of its congeners appears to be over-cautious, with evidence to the contrary coming from several sources old and new. Moreover, montane habitats are relatively secure compared to lower formations. The population was estimated in 1993 at c.5,000 individuals and declining. The population is suspected to be in decline owing to ongoing forest degradation and trapping for the cagebird trade. Forest loss may represent a threat but it is not thought to have a significant impact within this species’s alititudinal range. Many parrots in the region are affected by trapping for trade, but its impacts upon this species are not known

It occurs in groups of 2-10 individuals and apparently undertakes daily altitudinal migrations.