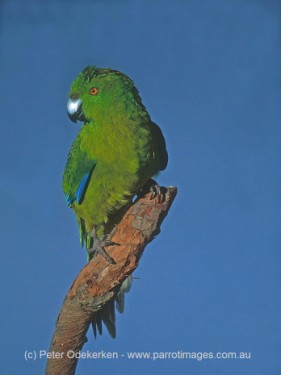 Listen to the sound of Green Parakeet

Found up to 2000m (6560 ft) in various wooded habitats except tropical rainforest.

Nest is usually located in tree cavity, rock crevice, hole in building or termite mound. Also in urban settings and more pristing forest and woodland edge. In captivity clutch ize 4 eggs which are incubated for 23 days. Young fledge after another 7 weeks.

Like other parakeets, Green Parakeets are food generalists that can be considered a pest when they get into agricultural crops in flocks. Feeds on seeds, nuts, berries and fruits, and often takes maize.

Some local movements in search of food recorded.