Source to all birds on the Planet
admin
Africa, Psittacidae, Psittaciformes
Comments 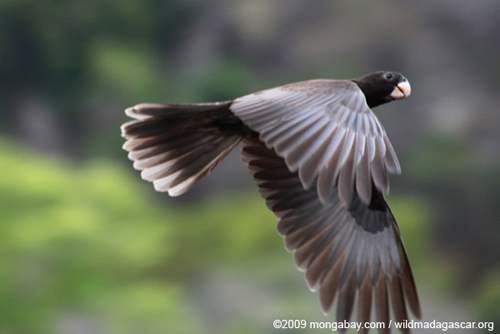 Two of the most fascinating parrot species are in the genus Coracopsis: C. vasa, the greater vasa parrot, and C. nigra, the lesser vasa or black parrot. Native to Madagascar and surrounding islands, vasa parrots are the largest parrots in their natural range. An adult greater vasa parrot’s body size (500 grams) is comparable to a large Congo African grey parrot. However, vasa parrots have extremely long necks, legs and tails, giving them the appearance of a much larger bird. The plumage is a subtle grayish-black and often reflects bluish hues in sunlight. The ceres and eye rings are naked. At first glance, these birds look as if they might be a strange cross of crow, pigeon and pheasant until you see the signature hookbill of a parrot.

Listen to the sound of Greater Vasa Parrot

Inhabits variety of habitats from moist dense forest to open dry woodland and savanna, to cultivated areas and inhabited areas. Up to 1000m (3280 ft).

Builds nest in Baobab tree, usually several nests in one tree. Clutch ize is 3 eggs which are incubated (in captivity) for about 17 days; young fledge after another 6-7 weeks.

Congregates in noisy parties and in larger flocks when feeding or roosting. Roosts in tops of tall trees with a lookout to warn of danger. Active on moonlit nights. Consumes seed, nuts, berries, fruits; cultivated maize, rice and millet.

This species has a very large range, and hence does not approach the thresholds for Vulnerable under the range size criterion (Extent of Occurrence <20,000 km2 combined with a declining or fluctuating range size, habitat extent/quality, or population size and a small number of locations or severe fragmentation). Despite the fact that the population trend appears to be decreasing, the decline is not believed to be sufficiently rapid to approach the thresholds for Vulnerable under the population trend criterion (>30% decline over ten years or three generations). The population size has not been quantified, but it is not believed to approach the thresholds for Vulnerable under the population size criterion (<10,000 mature individuals with a continuing decline estimated to be >10% in ten years or three generations, or with a specified population structure). For these reasons the species is evaluated as Least Concern.
Hunted for food. Officially treated as a harmful species due to predation of crops. Also trapped for wild bird trade. Also threatened by habitat loss.

Probably sedentary but may move locally in search of food.