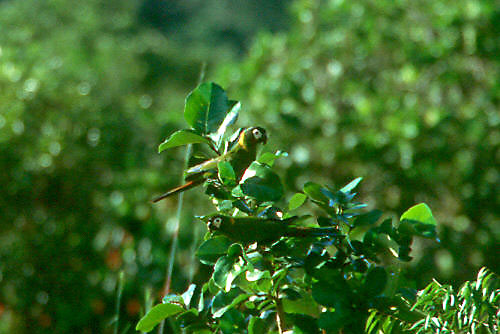 Primolius is a genus of macaws comprising three species, which are native to South America. They are mainly green parrots with complex colouring including blues, reds and yellows. They have long tails, a large curved beak, and bare facial skin typical of macaws in general. They are less than 50 cm long, much smaller than the macaws of the Ara genus.

Primarily green, Yellow-collared Macaws have a bare white facial patch, a blackish green forehead and nape, a narrow yellow collar which reaches to the sides of its breast, blue on the primaries and primary coverts and a red and blue tail

Listen to the sound of Golden-collared Macaw

These parrots can be found in gallery woodland in Pantanal, deciduous Chaco woodland, agricultural plots and ranchland and humid tropical forest. Occurs in variety of habitats such as forest, forest edge, woodland and savanna; moist upper tropical and subtropical forest in Argentina, dry forest in Bolivia, chaco in Paraguay and pantanal, open cerrado and gallery forest in Brazil. Up to 600m (1968 ft), in some areas 1700m (5576 ft).

Nest in tree holes, clutch size in captivity 3-4 eggs which are incubated for about 3 weeks. Young fledge after another 7 weeks.

Large flocks where food abundant, and at roosts. Occasionally feeds on the ground. Diet consists of fruits, flowers, maize and seeds.

Resident. Flocking behavior has been observed in Yellow-collared Macaws outside of their breeding season, fueling the suggestion that these birds undergo local seasonal movements.