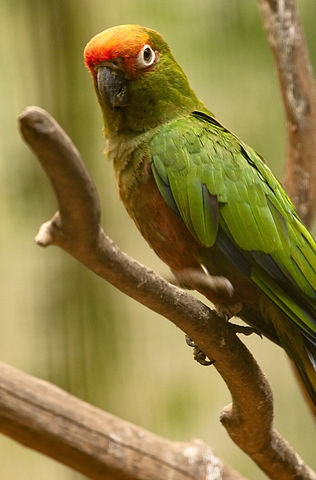 Listen to the sound of Golden-capped Parakeet

It is found in both humid Atlantic coastal forest and inland transitional forests. It is largely dependent on semi-deciduous forest, but forages and breeds in forest edge, adjacent secondary growth, agricultural areas and even urban areas. Like other Aratinga, it seems to adapt well to mosaics of forest fragments, pastures and agriculture, and in Goias and Minas Gerais it also uses areas of cerrado.

Hardly any information, seems to breed in october, some suggest the summer. Clutch size in captivity 3-5 eggs.

It feeds on fruits (such as mango, papaya and orange) and seeds (such as maize), and was formerly considered a serious pest.

This species is thought to have a moderately small population which is declining in some areas owing to habitat loss. However it seems to cope relatively well with alteration of its habitat and is consequently classified as Near Threatened.
There has been extensive and continuing clearance and fragmentation of suitable habitat for coffee, soybean and sugarcane plantations in S
← Previous Post
Next Post →