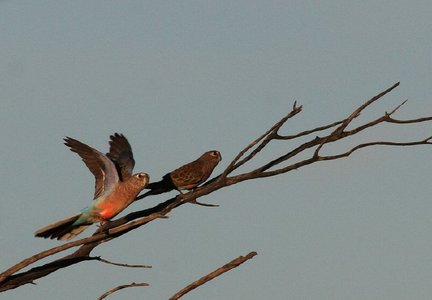 The Bourke’s Parrot (Neopsephotus bourkii, formerly known as Neophema bourkii) is a small parrot originating in Australia and the only species in its genus Neopsephotus. This species is sometimes placed in the genus Neophema and there is an ongoing discussion about the proper taxonomic placement of this species.

Listen to the sound of Bourkes Parrot

Australasia : Central, West Australia. Bourke’s Parrot is widespread across arid and semi-arid areas of the inland, from north-western New South Wales and south-western Queensland to the mid-coast of Western Australia, and from the Devil’s Marbles in Northern Territory south to Port Augusta, South Australia.

Bourke’s Parrot is found in mulga and other acacia scrubs, and in native cypress and other open eucalypt woodlands.

Bourke’s Parrots form monogamous pairs. They nest in a hollow, usually vertical, of a dead tree or stump. The eggs are laid on decayed wood in the bottom of the hollow. The female incubates the eggs, leaving the nest once a day to be fed regurgitated seeds brought by the male, and both parents brood the young. The Bourke’s Parrot has a clutch of 3 to 6 eggs, which are incubated by the female for 18?19 days, with the chicks fledging at about 4 weeks of age.

Bourke’s Parrots feed mainly on the ground, and only occasionally in trees. Pairs, or small groups of four to six, feed on seeds of grasses and herbs. They need to be near a source of water, which they visit usually at dawn and dusk.

This species has an extremely large range, and hence does not approach the thresholds for Vulnerable under the range size criterion (Extent of Occurrence <20,000 km2 combined with a declining or fluctuating range size, habitat extent/quality, or population size and a small number of locations or severe fragmentation). The population trend appears to be increasing, and hence the species does not approach the thresholds for Vulnerable under the population trend criterion (>30% decline over ten years or three generations). The population size has not been quantified, but it is not believed to approach the thresholds for Vulnerable under the population size criterion (<10,000 mature individuals with a continuing decline estimated to be >10% in ten years or three generations, or with a specified population structure). For these reasons the species is evaluated as Least Concern.
In eastern Australia, Bourke’s Parrot appears to have been adversely affected by overstocking and rabbit plagues, both of which remove understorey plants. In some areas of Western Australia, populations of Bourke’s Parrots have expanded since grazing was scaled down, allowing vegetation to regenerate.

The movements of Bourke’s Parrot are not well-known. Although thought to be nomadic, it is likely that they are resident in some areas.