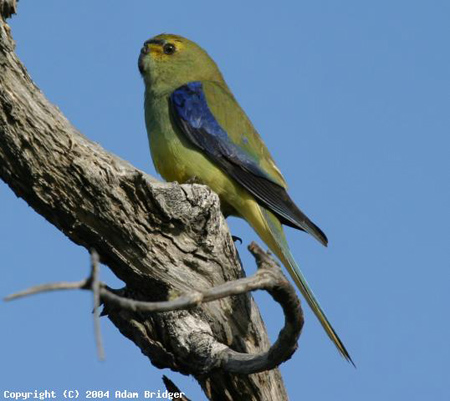 Australasia : Southeast Australia. The main populations of Blue-winged Parrots are in Tasmania and Victoria, particularly in southern Victoria and the midlands and eastern areas of Tasmania. Sparser populations are found in western New South Wales and eastern South Australia, extending to south-west Queensland and occasionally into the Northern Territory

Several pairs may nest in a single tree, forming a breeding colony. Blue-winged Parrots breed in Tasmania, coastal south-eastern South Australia and southern Victoria. They form monogamous pairs and make their nests in a tree hollow or stump, preferably one with a vertical opening. The eggs are laid on a bed of decayed wood. The female alone incubates the eggs, leaving the nest at intervals to be fed by the male, but both parents feed the nestlings. Clutch 4-6 eggs, incubted for about 18-20 days. Young fledge after another month. When choosing nest sites, Blue-winged Parrots try to get one with a small opening that will prevent predators, like Grey Shrike-thrushes, getting in to steal the eggs and young.

Pairs or small parties of Blue-winged Parrots forage mainly on the ground for seeds of grasses and herbaceous plants.

There is a definite passage of Blue-winged Parrots to and from Tasmania after breeding each year, leaving in March to April and returning in August to October. Some birds, however, over-winter in Tasmania or on the Bass Strait islands.