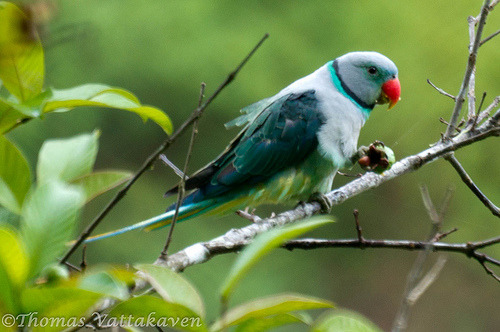 Members of the parrot genus Psittacula or Afro-Asian Ringnecked parakeets as they are commonly known in aviculture originates found from Africa to South-East Asia. It is a widespread group, with a clear concentration of species in south Asia, but also with representatives in Africa and the islands of the Indian Ocean. This is the only genus of Parrot which has majority of its species in continental Asia. Of all the extant species only Psittacula calthropae, Psittacula caniceps and Psittacula echo do not have a representative subspecies in any part of mainland continental Asia. The Rose-ringed Parakeet, Psittacula krameri, is one of the most widely distributed of all parrots.

The Blue-winged Parakeet is bluish grey with a long yellow-tipped tail. The black neck ring is complete in both males and females. The male has a bluish-green lower edge to the black collar and the upper mandible is red with a white tip while the female has an all black bill and has only the black collar. The female looks similar to the female of the Plum-headed Parakeet which however can be told apart by its broad yellow collar.

Listen to the sound of Blue-winged Parakeet

Found from 450-1000m (1476-3280 ft) in upland evergreen rainforest, both primary and secondary. Also found in deciduous forest with bamboo and abandoned coffee and rubber plantations. Found in family groups or small flocks. Associates with Plum-headed Parakeet at lower elevations.

They breed in the dry season after the northeast Monsoon and the chicks fledge before the southwest Monsoon in June. They nest in holes in trees (often tall Mesua ferrea species), especially old woodpecker and barbet nests. The birds begin breeding in December and about 4 eggs are laid in December and January. The usual clutch was 4 eggs which hatch after about 23 days. The female initially broods with the male bringing food and later the male takes over. The chicks fledge in about a month and leave the nest.

They breed in the dry season after the northeast Monsoon and the chicks fledge before the southwest Monsoon in June.