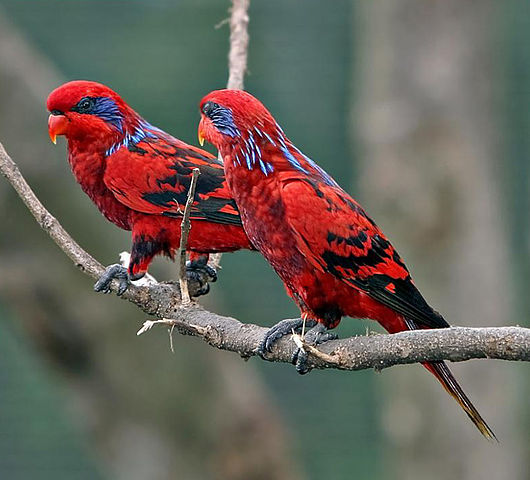 Listen to the sound of Blue-streaked Lory

Australasia : Tanimbar Islands. Eos reticulata is restricted to the Banda Sea Islands Endemic Bird Area, Indonesia, where it is found on Tanimbar (Yamdena and Larat), with populations reported on Babar, Damar and Kai in the late nineteenth century but not since.

No data, in captivity clutch size 2 eggs, young stay in est for about 3 months,

Habits are similar to those of other Eos species. Usually seen in flying flocks of ten or more birds; flocks are often noisy. When seen singly or in pairs are more shy. No dietry data, visits coconut plantations and sago palms.

This species’s population trends are poorly known, however it may undergo a moderately rapid population decline in the near future owing to the twin ravages of trapping and deforestation, and is therefore classified as Near Threatened.
Habitat loss continues apace in the south of Yamdena and this, combined with continuing trapping, may be causing it to decline.