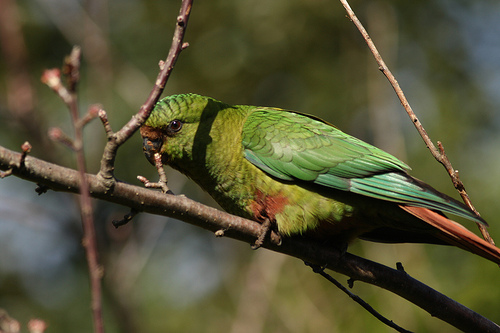 This genus comprises two species. The Slender-billed Parakeet (Enicognathus leptorhynchus), is a bird species in the parrot family. It belongs to the smaller long-tailed Arinae (macaws and conures), and is consequently also known as Slender-billed Conure. It is endemic to southern Chile and Argentina; is known by the common name Choroy. The second species in this genus is the Austral Parakeet, Austral Conure or Emerald Parakeet, Enicognathus ferrugineus, is a parrot found on the southern tip of South America – further south than any other parrot – ranging as far north as Temuco.

Listen to the sound of Austral Parakeet

Found at a variable range of altitudes, this species stays near sea level in the extreme southern portion of its range, but can be found up to 2000 meters in elevation at more northerly portions of its range. Mostly in wooded country; also in more open habitat and cultivated areas.

Did You Know?The Andean Parakeet nests in burrows in steep banks.

Status in the Wild
World Population:
Not recorded

The Austral Parakeet is a cavity-nester and usually lays 4-8 eggs in a deep, hollow, tree cavity. Scratching sides of cavity for thin bits of wood to line nest. May also add loose feather when they find them, but will not pluck their own.

Mainly a seed-eating bird, this species is very tame and often lives in close association with humans, where it has been known to cause significant damage to local grain crops. They will also east nuts, fruits, berries, and leaf buds when available.