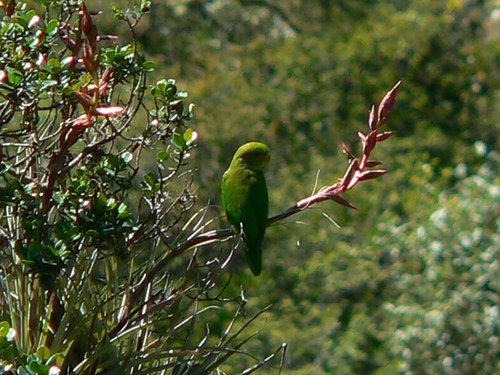 The Andean Parakeet is plump and relatively short-tailed, and dark green throughout, with a yellow tinge to the face and belly, brightest in the throat and upper breast. The outer webs of the primaries are teal, and can even approach violet. Juveniles lack the yellow tinge, and all ages have a plain grayish bill and dull pink legs.

Listen to the sound of Andean Parakeet

The Andean Parakeet is uncommon to locally common from 3,000-4,000m in semi-arid cloud forests, especially with polylepis, or in brushy montane ravines. It forages in small groups or pairs in bamboo thickets or leguminaceous trees, and occasionally on the ground, and nests in deep burrows in steep embankments.

The Andean parakeet is one of those parakeets that nests underground. A burrow will be formed in a steep bank. A clutch of up to ten eggs (but generally 4 to 6) may be laid. The eggs are incubated by the hen for about 20 days

Diet consists of seeds, buds and berries. Gregarious; seen in pairs, small groups and occasionally large flocks of over 300 birds. Feeds in bamboo, brambles and leguminaceous trees. Forages in vegetation or on the ground.