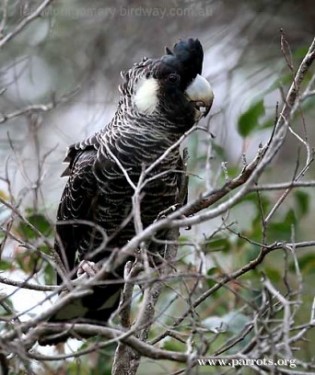 Restricted to moist, heavily forested areas dominated by marri Eucalyptus calophylla, karri E. diversicolor and jarrah E. marginata. Its overall non-breeding range may be determined by distribution of marri, though it does occur in apple and pear orchards and occasionally in wandoo E. wandoo woodland

It breeds in large hollows of old karri, marri and jarrah within heavily forested areas, although recent work suggests that there are very few nest sites, that breeding occurs very infrequently and that many nest hollows are being taken over by feral bees. Breeding data has indicated that pairs raise, on average, 0.6 chicks each year. In years of poor marri seed production, the population may fail to raise any young at all. The species has a strong association with very large (greater than 1.5m diameter) and old (230-300 years) marri trees, which may exacerbate declines. Usually to eggs in captivity incubated for about 4 weeks. Young fledge after probably 10-11 weeks. In most cases only one young survives to adulthood.

The species mainly feeds on the seeds and flowers of marri, as well as the seeds of Banksia, Hakea and Dryandra species, Erodium botrys and jarrah, and additionally takes insect larvae. It also feeds on apple and pear seeds4 and is considered a pest owing to the damage it causes when extracting seeds from crops in commercial orchards. Damage to commercial fruit crops is thought to be higher during local or seasonal shortages of marri seeds, and could be related to destruction of this habitat.

Despite this species having a moderately small population, only about 10% of individuals make up the breeding population, and numbers are in decline. The species is therefore listed as Endangered.
Up to a quarter of the species’s habitat has been cleared for agriculture, with 8,933,294 m of marri harvested during 1976-1998. The past and present impacts of logging for marri, initially for woodchips and now for furniture grade sawlogs, are reducing the availability of food and nesting trees. The impact of logging and woodchipping has not been quantified. Although logging of old growth forest in the south-west has now stopped, habitat loss is still likely to be causing population declines, and a sawlog industry based on marri has now been proposed with a projected minimum bole log harvest of 286,000 m3 per annum. Feral bees have been found to occupy many potential nest sites, and are known to have caused the loss of chicks and killed a brooding female. Although the species has been fully protected since 1996, illegal shooting by orchardists still occurs. It is not known whether losses from shooting exceed productivity. Continued loss of forest to mining in some areas is also an issue, since revegetation will have no impact on conservation outcomes within the lifespan of this species. Competition for nests from Wood Ducks Chenonetta jubatta is thought to be increasing as duck numbers increase in the south-west.