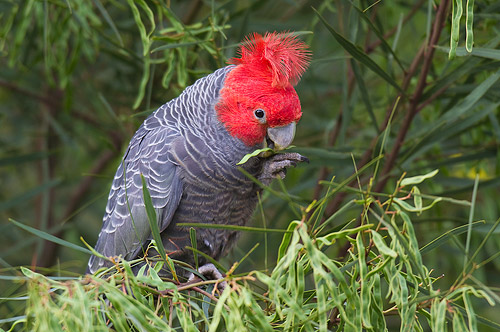 The Gang-gang Cockatoo was most often allied with the white cockatoos of the genus Cacatua. This has always been controversial due to the unusual appearance and coloration of the bird, especially its sexual dichromatism. New research has finally resolved the matter, with the Gang-gang Cockatoo being recognized as a distinctive early offshoot of the calyptorhynchine (dark) cockatoos. Considering the robust phylogeny of the cockatoos now established, a comparison of characters gained and lost during the evolution of cockatoos suggests that the Gang-gang Cockatoo – while of course much changed and adapted during the perhaps 20 million years since its last common ancestor with any other living species lived – is probably still very similar in overall appearance to how the earliest cockatoos would have looked, and certainly the most primitive-looking of the species alive today.

Listen to the sound of Gang-gang Cockatoo

Montane forest to 2,000 m (6,700 ft), especially with eucalyptus groves; during winter in open woodland, cultivated areas and parks; occasionally in suburbs of towns.

Unlike most other cockatoos, Gang-gangs nest in young, solid trees, the females using their strong beaks to excavate nesting cavities. Also breed in the canopy of most trees. Gang-gang Cockatoos form close, monogamous pairs. The female chooses a nest hollow in a suitable tree and both sexes prepare the nest for egg-laying, lining it with wood-chips and dust by chewing at the sides of the hollow. Both sexes incubate the 2-3 eggs for about a month and care for the young. Fledging occurs after about 7 weeks. Parents feed their young for a further four to six weeks after fledging and family groups will be seen feeding together during the breeding season. In some cases, ‘cr
← Previous Post
Next Post →