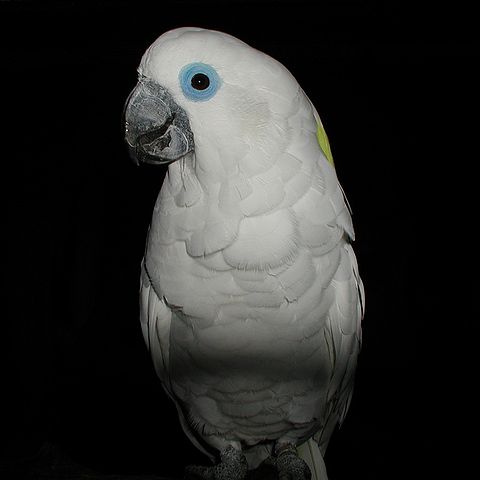 Cacatua is a genus of cockatoos found from the Philippines and Wallacea east to the Solomon Islands and south to Australia. They have a primarily white plumage (in some species tinged pinkish or yellow), an expressive crest, and a black (subgenus Cacatua) or pale (subgenus Licmetis) bill. Two major subdivisions can be recognized within Cacatua. One group is characterized by the possession of heavy bills, up curving coloured crests and round wings (alba, galerita, leadbeateri, moluccensis, ophthalmica, sulphurea); within this group leadbeateri and alba have substantially smaller bills than the other species but are alike in the shapes of the crests and wings. The other subdivision has smaller bills, short uncoloured crests and more slender wings (ducorpsi, goffini, haematuropygia, pastinator, roseicapilla, tenuirostris). Large individuals of the larger species (e.g. pastinator) approach and possibly slightly overlap smaller examples of leadbeateri and alba in bill size. Today several species from this genus are considered threatened due to a combination of habitat loss and capture for the wild bird trade, with the Blue-eyed Cockatoo, Moluccan Cockatoo and Umbrella Cockatoo considered Vulnerable, the Red-vented Cockatoo considered Endangered, and the Yellow-crested Cockatoo considered Critically Endangered.

White cockatoo, bases of head feathers undersurfaces of wing and tail suffused with yellow. Yellow crest feathers only visible easily when crest is erect. Grey-black bill and feet and diagnostic sky-blue wattled skin around the eyes (much darker than on other similar cockatoos).

Listen to the sound of Blue-eyed Cockatoo

Australasia : Bismarck Archipelago. Cacatua ophthalmica is endemic to New Britain Papua New Guinea where it is widespread in suitable habitat.

It inhabits tropical lowland rainforest up to an altitude of 1000 m. Although it occurs in disturbed forest it presumably relies on intact forest with large trees for nesting.

No data on wild status, in captivity clutch size is 2 eggs incubated for about 4 weeks. Young fledge afer 12-13 weeks.

This species has been uplisted to Vulnerable because remote-sensing techniques indicate that the lowland forest on which this species depends for nesting is being cleared at such a rate that the population is likely to be undergoing a rapid decline.
Rapid conversion of lowland forest to oil plantations over the last thirty years is likely to have caused a significant loss of breeding habitat. Although it is rare in the international trade, even limited trapping would be a cause for concern. Although the species may still appear to be relatively numerous, it is long-lived and declines in reproductive output due to deforestation may be masked.