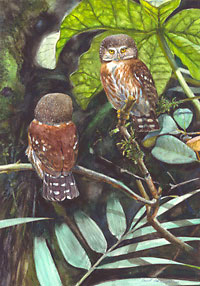 Glaucidium mooreorum was newly described from the Reserva BiolÃ³gica de Saltinho (which covers just 4.8 km2) in Atlantic coastal forest in Pernambuco, Brazil. It was tape-recorded in the same locality in November 1990. The species was also found in a 100 ha forest patch at Usina Trapiche (08 35’S, 35 07’W) in November 2001. It occupies a tiny and severely fragmented range. Playback surveys in lowland forests elsewhere in Pernambuco and Alagoas states since 2004 have failed to locate this species1, and there are no records from other well-surveyed forest sites in the region. Its population has not been estimated accurately but is assumed to be tiny based on the lack of records outside its tiny range and continuing deforestation within the area. A typical Neotropical pygmy-owl of the Glaucidium minutissimum species complex. It has a light grey-chestnut coloured crown and head speckled with conspicuous white spots on the face and head to the lower nape. Has a white collar and white underparts streaked with rufous. Back is chestnut. Tail dark with white spots. Similar spp. it differs from its geographically closest relatives in its overall lighter colouration, size and voice. Voice a short phrase of 5-7 notes. It has been recorded in the canopy of old secondary forest where it was observed eating a cicada. An unconfirmed report suggests the species is vocal during the rainy months of April and May1. It has been recorded in forest upto 150 m but has not been found in other well surveyed forest in the region at elevations between 400 and 600 m. The Pernambuco Center where this species was described is by far the most modified region of Atlantic Forest having declined in extent from c. 39,500 km2 to c. 1,900 km2 by 2002. The remainder is severely fragmented and legal restrictions have proven inadequate in halting deforestation from fire and illegal logging. Hunting is also reported to pose a threat to this species.