Source to all birds on the Planet
admin
Eurasia, Pelecanidae, Pelecaniformes
Comments 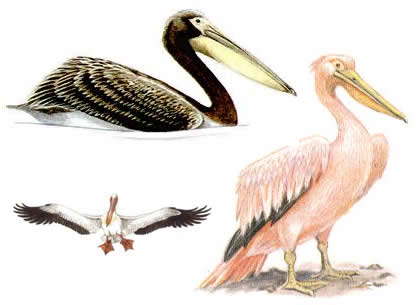 At distance on water or ground, difficult to separate from other west Palearctic pelicans, but, in flight, adult distinguished from Dalmatian and Pink-backed Pelican by diagnostic wing pattern showing above only black outer primaries and coverts but below wholly black wing-quills contrasting sharply with white coverts. This underwing pattern also marked in immatures, but indistinct in juveniles. At close range, adult separable from Dalmatian Pelican by cleaner, whiter plumage, black wing-quills, leg colour, red eyes, and greater area of orbital skin which narrows forecrown feathering to sharp point just reaching centre of base of upper mandible; from Pink-backed Pelican, by longer, usually yellower bill and pouch, larger size, much whiter appearance (lacking grey tones), and again larger area of orbital skin and pointed forecrown feathering. Separation of young birds difficult.

Listen to the sound of Great White Pelican

Breeding occurs in spring in temperate zones of Europe; all year round in Africa. This pelican breeds as it lives, in a large colony near water. Male courting behavior includes a display of vivid colors on the gular pouch and a moulted crest. Pair formation, nest site selection, and nest building occurs rapidly (few hours to no more than a week). The nest is on the ground and consists of either a pile of sticks or little more than bare rock. This pelican averages two eggs; incubation of 29-36 days; fledging at 65-75 days. Breeding success rate of .64 chicks per attempt. Sexual maturity at 3-4 years.

Primarily eats fish. In Europe, prefers carp; in Africa, prefers cichlids. Large fish make up 90% of the Great White Pelican diet. The other 10% includes abundant small fish, and, in SW Africa, eggs and chicks of the Cape Cormorant (Phalacrocorax capensis). Estimated daily food requirement of 900-1200 grams (or 2-4 large fish). Feeds in groups, often cooperatively–this is rare among birds. In cooperative feeding, 8-12 pelicans get in a horseshoe formation on the water; they surround and force fish into shallow water, flapping wings and plunging bills to catch the fish along the way. When it catches a fish, the pelican tilts its bill up and swallows the fish whole.

This species has a very large range, and hence does not approach the thresholds for Vulnerable under the range size criterion (Extent of Occurrence <20,000 km2 combined with a declining or fluctuating range size, habitat extent/quality, or population size and a small number of locations or severe fragmentation). The population trend is not known, but the population is not believed to be decreasing sufficiently rapidly to approach the thresholds under the population trend criterion (>30% decline over ten years or three generations). The population size is very large, and hence does not approach the thresholds for Vulnerable under the population size criterion (<10,000 mature individuals with a continuing decline estimated to be >10% in ten years or three generations, or with a specified population structure). For these reasons the species is evaluated as Least Concern.
Pelecanus onocrotalus is a patchily distributed summer visitor to south-east Europe,
which accounts for less than a quarter of its global breeding range. Its European
breeding population is small (as few as 4,100 pairs), but underwent a large increase
between 1970-1990. The stronghold population in Romania was stable during 1990-
2000, and although there were slight declines in Turkey, the species was stable overall.
Nevertheless, its population size renders it susceptible to the risks affecting small
populations, and consequently it is evaluated as Rare.
This pelican inhabits Eastern Europe, Asia and Africa. Its European populations are migratory, but their exact winter quarters are unknown. Since the second half of last century this species is undergoing a strong decrease and its breeding area is contracting. The Greek colony of Micra Prespa, the only one in the European Union, is totalling 40-100 breeding pairs, which represents 1-3% of the total European population

Northern populations migratory, but perhaps only dispersive in tropics. Considering conspicuousness, extraordinarily little known of movements; no ringing recoveries. Few winter Balkans or Turkey, so most European and Turkish breeders must migrate. 1000-3000 wintering northern Israel since late 1980s. At Bir Hasana (Sinai), 1450 flew south-west 19 November 1992, but now rare in Egypt in winter, so most presumably continue south where presence might be masked by large resident African populations. Thousands winter Mauritania. Like storks, not infrequently migrate by soaring in thermals, though more usually by direct flight in V-shaped formations at high altitudes. Danube delta breeders depart September to early November, returning late March to April, both movements later than Dalmatian Pelican.