Source to all birds on the Planet
admin
Anhingidae, North America, Pelecaniformes
Comments 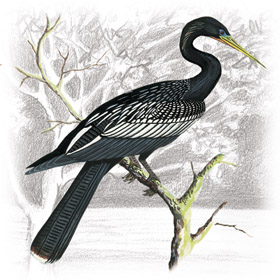 An anhinga has an average body length of 85 cm, weight of 1350 g, wingspan of 117 cm, and bill length of 81 mm. The head is small and appears to be merely an extension of its long snake-like neck. In this neck, the 8th and 9th cervical vertebrae create a hinge-like apparatus that allows the quick catching of prey. The long, sharp, serrated bill also aids it in hunting. The wings are broad, allowing it to soar, and the feet are webbed to facilitate swimming. The physical structure of the legs is, however, more suited to crawling out of water onto land and for climbing bushes and trees. The tail is long and is used for providing lift, steering, braking, and balancing. When spread in flight, the tail resembles that of a turkey. The overall body of an anhinga resembles that of a cormorant; the hunting action of the head and neck is more similar to a heron.
Anhingas are dimorphic; the male has brighter colors than the female. The male has greenish-black plumage overall, accentuated by silver-grey feathers on the upper back and wings that are edged with long white plumes. It also has a black crest. Females are brown with a lighter brown head and neck. Juveniles are a uniform brown color. Molting of all flight feathers at the same time render it flightless for a while. Unlike some aquatic birds, all of Anhingas body feathers become completely wet upon contact with the water, allowing it to be able to dive through the water more easily. This feature, however, causes it to have little buoyancy, to lose heat quickly, and hinders flight. Anhinga starts its flight by either running on the surface of the water or diving from a tree. It usually returns to the water by gliding into it from a perch or crawling into it from land. Only the head and neck are visible when in the water due to its low buoyancy. Most of the time spent in the water is devoted to fishing, otherwise it is found perched in trees. Often it crawls from the water and then up to a high perch in order to sun itself. Similar to cormorants and turkey vultures, Anhinga suns itself by spreading out its wings, which allows it to dry out the plumage and absorb heat from the sun. Anhinga loses heat quickly in the water due to its lack of an insulating layer of body feathers; thus, the sun’s radiation helps it to maintain its body temperature.

Anhinga prefers to stay on its own, but at times is found among groups of herons, cormorants, ibises, or storks. Although it does nest in small loose groups with its species, it is unusual to find it with other anhingas. Normally a quiet bird, its vocalizations include clicks, rattles, croaks, and grunts. It typically calls while on or near the nest, and occasionally while flying or perching. It is particularly silent and elusive when flightless due to molting.

Listen to the sound of Anhinga

The northernmost distribution of Anhinga anhinga leucogaster is in the United States from North Carolina to Texas. It has however been spotted as far north as Wisconsin. Its range also includes Mexico, Central America, Panama, and Cuba. The individuals found in the more northern areas of the U.S. migrate there in March and April and stay until October, then return to Mexico and more southern parts of the U.S. A. anhinga anhinga is found in South America from Colombia to Ecuador, east of the Andes to Argentina, and in Trinidad and Tobago. The Anhinga’s range is limited by cool temperatures and low amounts of sunshine. Not uncommon in Surinam where it nests with several other, mostly herons, species.

Anhingas prefers freshwater and coastal aquatic habitats that include shrub or tree-covered islands or shores; these habitats include lakes, marshes, swamps, mangrove swamps, shallow coastal bays, and lagoons. Within such habitats, An Anhinga is able to stalk slow-moving prey and seek refuge from danger in the water, and perch and sun itself in the treetops.

Anhinga is believed to reach sexual maturity around two years of age. In sub-tropical or tropical latitudes, breeding can occur throughout the year, or be triggered by wet or dry seasons. Anhinga is monogamous and pairs may reuse nests from year to year. The male begins courtship by soaring and gliding, followed by marking a possible nest location with leafy twigs. Then it performs behavioral displays to attract the female. Once the pair is formed, the male gathers nesting material, while the female builds a platform nest, which is usually on a branch overhanging water or in open areas in the tops of trees. The female constructs the nest by weaving sticks together and padding it with live twigs and green leaves.

The pair copulate on the nest, the male holding onto a stick or the female’s bill with his bill. The female lays one egg every one to three days, until she has a clutch anywhere from two to six eggs. Average clutch size is four eggs. The oval-shaped eggs are bluish-white or pale green, sometimes occurring with brown speckles. The parents share in incubating the eggs for 25 to 30 days.

Usually, the highly territorial males defend any threats to nesting territories with extensive displays and even fighting. If another male approaches the territory, the resident male spreads its wings and snaps its beak. If no retreat occurs, fighting will commence by pecking at each other’s heads and necks. Females are less aggressive, but will defend the nest if necessary.
Upon hatching, A. anhinga chicks are naked and helpless. They eventually grow a white down on their belly side and a dark down on their back side. At first the parents feed the chicks by dripping fluid and regurgitated material from partially digested fish down their throats. As the chicks grow older, they shove their heads down the parents’ beaks to get this food material. The chicks are in the nest approximately three weeks, but if threatened, are able to drop into the water and swim away, later climbing out of the water and back into the nest. At the end of three weeks, they are able to climb out of the nest to a branch, and fledge at approximately six weeks. They stay with their parents for several more weeks before becoming independent.

Anhinga preys primarily on fish, but its diet can also include aquatic invertebrates and insects. Although not a particularly fast swimmer, it is an effective aquatic hunter, relying on its quick neck and sharp bill to catch prey. It targets slower-moving species of fish and stalks them underwater, finally striking out with its long neck and spearing the prey with its beak. It then brings the prey above water and jerks it off its bill, manipulating it in order to swallow the fish head first.

This species has a large range, with an estimated global Extent of Occurrence of 15,000,000 kmÂ². The global population size has not been quantified, but it is believed to be large as the species is described as ‘frequent’ in at least parts of its range (Stotz et al. 1996). Global population trends have not been quantified, but the species is not believed to approach the thresholds for the population decline criterion of the IUCN Red List (i.e. declining more than 30% in ten years or three generations). For these reasons, the species is evaluated as Least Concern. 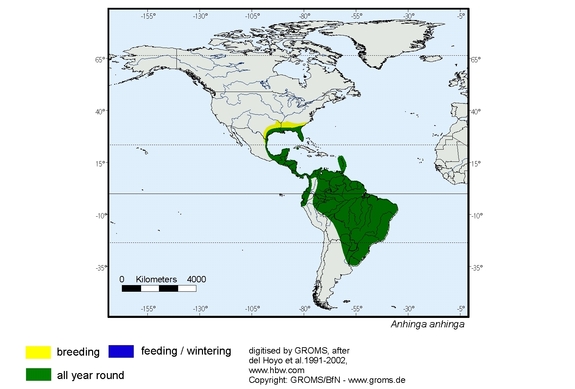