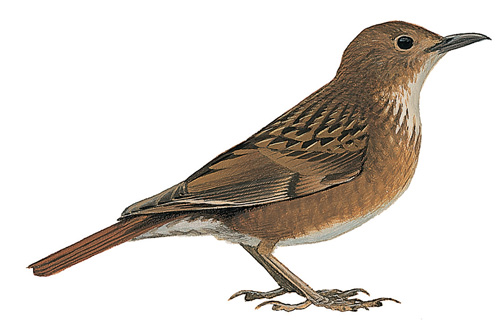 The name of Baron Friedrich Heinrich von Kittlitz is associated with the stories of several extinct birds. During the late 1820’s he explored a number of Pacific islands during a round-the-world expedition on a Russian corvette called the Senjawin. In June 1829 Kittlitz landed on Peel Island (Chichi-jima), the largest island in the Bonin group (Ogasawara-shoto). Kittlitz was one of only a very few Europeans to see the Bonins in something approaching their pristine state.

Within a few years of his visit, the original ecosystem had been shattered. Just two years after he left, a group of American, British and Polynesian colonists arrived and settled. Then whalers began to call and started to use the Bonins as a suitable place to replenish their stores and careen their vessels. Rats arrived and the devastation of the endemic birdlife was horrendous. Kittlitz made his landing place at a spot called Port Lloyd that had been visited and named just a year before by a British expedition under the command of a Captain Beechey in HMS Blossom. Surprisingly, Kittlitz found a seemingly common bird that the British had entirely overlooked, the handsome ground thrush that now bears his name. During his short stay, Kittlitz saw this bird quite often but no later naturalist ever did. He sailed away, apparently taking four specimens with him, and the bird was never seen again.

His specimens are today divided between the museums of Frankfurt, St Petersburg, Leiden and Vienna. Whether Kittlitz’s Thrush occupied other islands in the Bonin group is not known.