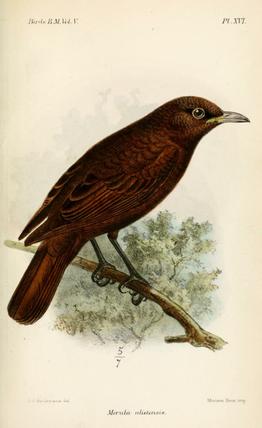 This is another of those species known today only from a painting by Georg Forster. This painting, now in the Forster portfolio at the Natural History Museum, London, was produced on 1st June 1774 at Raiatea in the South Pacific, and according to an inscription it shows a female.

Although no actual specimen is in existence, there was one once, and presumably this was the bird from which the picture was painted. The ornithological writer John Latham saw it in the collection of Sir Joseph Banks and wrote a description of it for his book General Synopsis of Birds (1781-1785), giving it the name “Bay Thrush”. Latham was a pioneering ornithologist, but headstrong, and in his early works he simply gave common English names to the birds he described, deliberately ignoring the fast-gaining Linnaean system of scientific naming. By the time he realized his mistake, he was too late: the lapse had left the field open for Johann Friedrich Gmelin, who in the meantime had produced his own book Systema Naturae (1788-1789), just a few years after Latham’s. Gmelin attached scientific names to many of the birds that Latham had originally described and, because of this, it is Gmelin’s name that is associated with so many of Latham’s original descriptions.

Naturally, a species represented in such a flimsy manner as is the Bay Thrush is bound to be surrounded by mystery – and this the Bay Thrush most certainly is. Most importantly, it is by no means sure that the species was actually a thrush. Georg Forster and his father Johann Reinhold were efficient naturalists who sailed with Cook, but when they saw this creature they were rather uncertain of its affinities and described it as a thrush with some degree of reluctance. A particularly un-thrushlike feature was a notch in the bill.

Whatever its precise relationships, this bird seems to have been a valid and distinct species. The reasons for its extinction are entirely unknown but this event must have happened soon after the visit of Cook and the Forsters for no other naturalist ever mentioned seeing the species. The Forsters themselves gave a few fleeting details about the bird in life. They said it had a soft, fluting voice and lived among thickets in valleys. Apart from these bare facts, nothing is known of the species.