Source to all birds on the Planet
admin
North America, Passeriformes, Troglodytidae
Comments 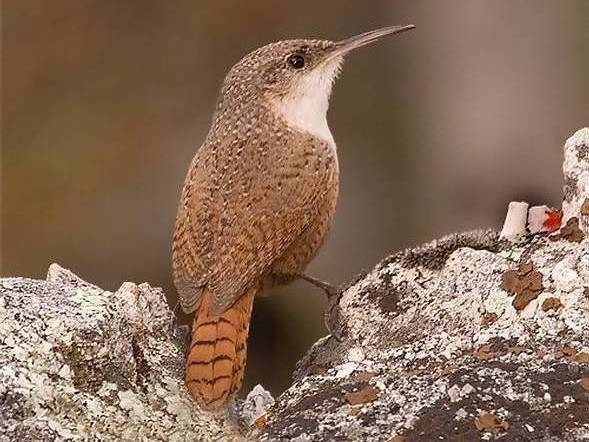 Note the white bib. Rusty, with dark rufous-brown belly contrasting with a white breast and throat.

Listen to the sound of Canyon Wren

Cliffs, canyons, rockslides; stone buildings. Generally around areas with steep rock faces and some dense low growth, as in steep-walled canyons or around the bases of cliffs; also in boulder fields and sometimes around ston
e buildings. May move into denser streamside vegetation away from cliffs in winter.

Nesting behavior is not well known. Male defends nesting territory by singing.
Nest:
Site is usually in hole or crevice in rocky cliff, among rock piles, on ledge in cave; sometimes in crevices in stone buildings, in abandoned sheds, in hollow stumps, or similarly protected sites. Nest (built by both sexes) has foundation of twigs, grass
, bark chips, and other coarse items, topped with cup of softer materials such as fine grass, moss, leaves, spider webs, plant down, animal hair, feathers.
Eggs: 5-6, sometimes 4-7. White, lightly dotted with reddish brown. Incubation is probably by female, incubation period not well known.
Young: Both parents probably bring food to nestlings. Development of young and age at which they leave the nest are not well known.

Mostly insects. Diet is not well known. Undoubtedly feeds mostly on insects; also some spiders, probably other arthropods.
Behavior:
Forages by hopping actively about among rock piles, up and down faces of steep rocky cliffs, or through very dense undergrowth in canyons. Uses its very long bill to probe deeply into crevices among the rocks. Usually forages alone, sometimes in pairs. H
as been seen stealing spiders stored in the nest of a predatory wasp.

Resident, southwestern British Columbia to southern Mexico. Migration: Unlike the Rock Wren, a permanent resident throughout its range, but may move into denser habitats in winter.