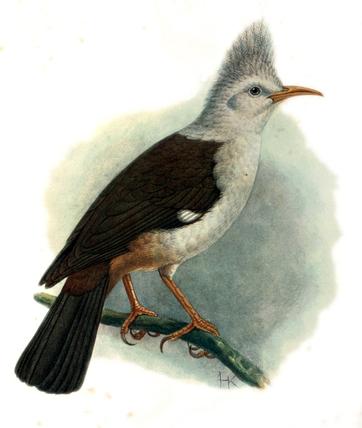 The skeletal remains of a starling were found on the island of Rodrigues during the 1870’s. Although there may be no connection, these bones have been associated with a brief account in the document known as the Relation de l’Ile Rodrigue, which was probably written by a marooned sailor named Tafforet during 1725. A translation reads:

A little bird is found which is not common…One sees it on the Islet de Mat, which is to the south of the main island, and I believe it keeps to that islet on account of the birds of prey which are on the mainland, and also to feed with more facility on the eggs of the fishing birds which feed there, for they feed on nothing else but eggs, or some turtles dead of hunger, which they…tear out of their shells. These birds are a little larger than a blackbird, and have white plumage, part of the wings and tail black, the beak yellow, as well as the feet, and make a wonderful warbling.

Whether these words should really be matched with the bones cannot be said with any degree of certainty.