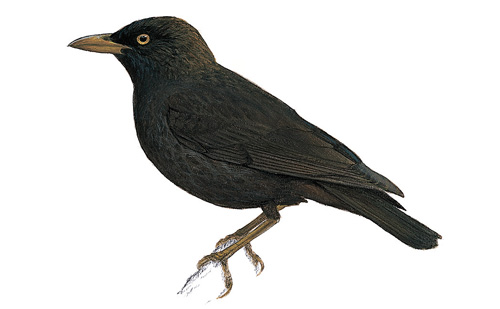 This species is known from just a single skin in the collection of the Natural History Museum, London. For many years this skin was a complete mystery and its origin was entirely unknown, but thanks to some comprehensive detective work conducted by Storrs Olson of the Smithsonian Institution in Washington, its origin is now relatively clear.

The bird was collected by Andrew Bloxam, a naturalist who served aboard HMS Blonde when it sailed to Honolulu carrying the bodies of Liholiho and Kamamalu, King and Queen of Hawaii, who had died of measles during a trip to London. While in the Pacific the Blonde called at the Cook Islands and on the afternoon of 9th August 1825 Bloxam went ashore on the island of Mauke. Here, during a visit of no more than two hours, he shot a pigeon, a kingfisher and a starling. Nothing more is known of his unique starling. Bloxam simply stated that his bird was killed “hopping about a tree”.