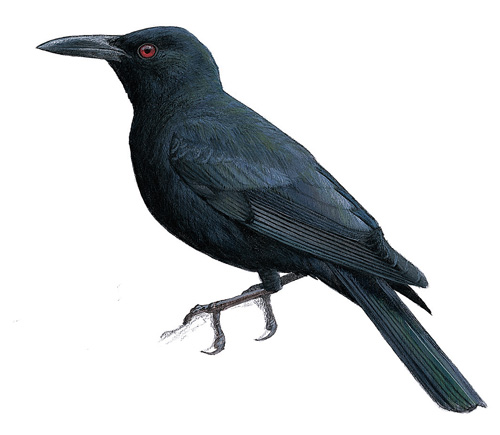 Three starlings of the genus Aplonis have vanished. The species from Kosrae Island, one of the Caroline group in the Pacific, is known from just a series of specimens collected by F. H. von Kittlitz in December 1827. Five skins exist today, three in St Petersburg and two in Leiden; there may be another in Frankfurt but it has not proved possible to verify this rumour. Kittlitz took both adult and immature individuals and expressed the opinion that he would not have believed these to belong to the same species had he not shot an intermediate example.

His observations reveal that the species lived on small mammals, lizards and insects. Its call was loud, and individuals were solitary in their habits. He recorded that it seemed rare at the time of his visit, and doubtless it was well on the way to extinction, as no later naturalist ever managed to locate it.

Kosrae had become a popular resort for visiting whalers, who used the island to repair their vessels and generally recuperate after their exertions. Rats were introduced and these animals quickly overran the island. They had a greatly detrimental effect on the bird populations, and doubtless their presence was a major factor in the starling’s extinction.