Source to all birds on the Planet
admin
North America, Passeriformes, Remizidae
Comments 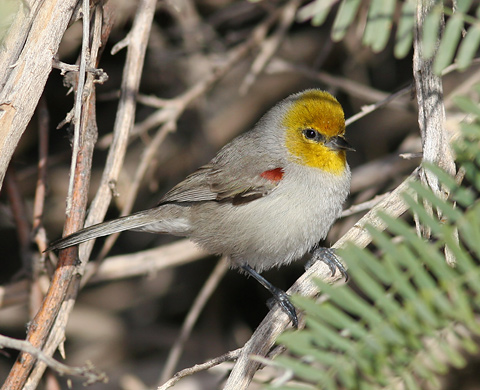 The Verdin is a species of penduline tit, and is one of the smallest perching birds in North America. It is mainly gray with yellow head and a reddish patch on the shoulders. The underside is paler gray. The tail is short and rounded. It has a sharp pointed bill. Male birds are brighter in color. Juvenile birds do not have yellow head or reddish shoulder patches.

Listen to the sound of Verdin

Brushy desert valleys, mesquites.
Most common in Sonoran desert and mesquite woods at lower elevations. Also lives in other kinds of low open brush, including desert stands of acacia and paloverde, thickets of saltcedar, low riverside woods. Common in suburbs of some southwestern towns.

Male may build several nests, with female choosing one to use for raising the young.
Nest: Placed well out on branches of thorny shrub or low tree, or in cholla cactus, usually 4-
12′ above the ground. Nest is a conspicuous hollow oval or sphere, surprisingly large for the size of the bird, made of thorny twigs. Entrance is low on one side; int
erior is well lined with feathers, grass, leaves, spider webs, for good insulation. Nests built late in spring tend to have entrance facing toward prevailing wind, which may help cool the interior.
Eggs: 4-5, sometimes 3-6. Pale green to blue-green, with reddish brown dots often concentrated around larger end. Incubation is by female, reportedly about 10 days.
Young: Both parents feed the nestlings. Young leave the nest about 21 days after hatching, but continue to return to nest to sleep at night.

Mostly insects. Feeds on tiny insects, including aphids, caterpillars, scale insects, leafhoppers, be
etle and wasp larvae, many others. Small spiders also important in diet. Eats berries, small fruits, sometimes seeds; regularly takes nectar.
Behavior:
Forages actively in shrubs and low trees, mostly among smaller branches. Takes most food from leaf surfaces, sometimes hanging upside down to reach undersides of leaves. Often visits flowers for nectar, and will come to hummingbird feeders. Sometimes cat
ches insects in the air, on the ground, or on the bark of branches.