Source to all birds on the Planet
admin
Passeriformes, Prunellidae
Comments 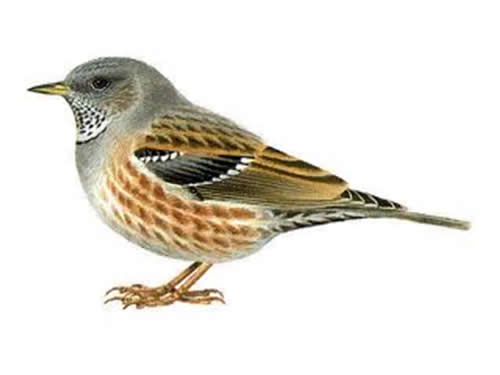 Prunella collaris is a widespread but patchily distributed resident in mountainous
areas of central and southern Europe, which accounts for less than half of its global
range. Its European breeding population is relatively large (>100,000 pairs), and
was stable between 1970-1990. Although there was no trend information available
for the sizeable populations in Spain, France, Italy and Russia, trends elsewhere in
Europe during 1990-2000 were stable, and the species probably remained stable
overall.

Listen to the sound of Alpine Accentor

Breeds exclusively in mountain ranges of middle latitudes, from 1800 m up to snow line, in some places up to 4000 m.
Encounters accordingly low temperatures and exposed conditions, although apparently choosing sunniest available site. Patches of alpine grassland strewn copiously with boulders or large stones, often on flat plateaux but sometimes on slopes or scree, and almost always well above tree line and relatively free of shrub growth. Nest sites are often restricted to particular rocky slopes and non-vegetated areas which were invariably free from snow each year due to the effects of strong winds and the topography.

Diet based on insects, plus significant proportion of plant seeds. Food taken principally on ground, bird moving with quick small hops or walking quietly.
Sometimes makes aerial sallies and will chase active prey on foot. Can hover for short periods

Breeding from May-Jul in Pyrenees and Alps. The nest is loosely made of grass, leaves and stems, with neat inner cup of moss lined with hair and feathers. Clutch size 3-4 eggs, the incubation period is 14-15 days and theeggs are incubated by both sexes.
Males competed for access to fertile females within their group territory. The females copulated promiscuously with all or several males within their breeding group.
Fertile females actively solicit copulation. A female approaches a male, crouches with her breast touching the ground, lifts her tail to expose a bright red, swollen cloaca, quivers her tail from side to side, and shivers her wings.
Each female holds a small territory around her own nest within the larger group territory. The female performed most of the parental care. Usually, 1-4 males helped feeding the young. multiple paternity occurred with up to three males siring offspring within one clutch. Females showed a nest-site fidelity for successive years.

This species has a large range, with an estimated global Extent of Occurrence of 10,000,000 kmÂ². It has a large global population, including an estimated 200,000-330,000 individuals in Europe (BirdLife International in prep.). Global population trends have not been quantified, but the species is not believed to approach the thresholds for the population decline criterion of the IUCN Red List (i.e. declining more than 30% in ten years or three generations). For these reasons, the species is evaluated as Least Concern. (source Birdlife.org)

Resident or subject to local altitudinal or more distant movements. Most descend in winter below snowline or seek snow-free patches. Wintering in lowland southern Europe apparently widespread though birds presumably sparsely distributed and occurrences perhaps irregular. A weak but distinct southerly movement occurs through several Alpine passes in October. In France, birds from Alps reach Basse-Provence and CÃ´te dâ€˜Azur. Upland breeding areas start to be fully reoccupied from mid-March, but mainly April.
Vagrants occur west and north to Britain and Fenno-Scandia. Less regular now in Britain than previously: only 10 records in period 1958-95, though total of 29 before that; mostly August-January, with a few March-June.
Distribution map breeding season