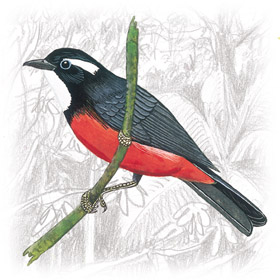 The male Rose-breasted Chat is unmistakable with its red underparts and white throat and flanks. The female is dark blue gray above tail dusky rest of body predominantly buff, paler on belly and throat.

Listen to the sound of Rose-breasted Chat

It is found in Bolivia, Brazil, French Guiana, Guyana, Suriname, and Venezuela.

Its natural habitat is subtropical or tropical moist lowland forests. It is found in the Amazon and Orinoco Basins at mid-levels in the forest and normally close to a stream or river.

Found in loose pairs foraging in mid-level to just below canopy. Searches very actively foliage for insects. It spends most of its time among tangled lianas.