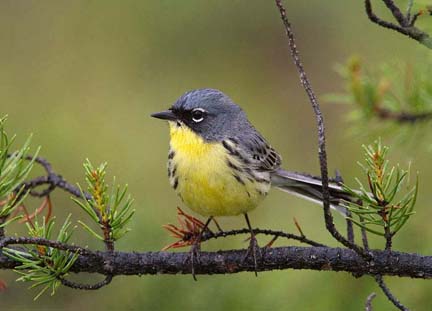 Bluish gray above, streaked with black; yellow below, with black spots or streaks confined to the sides. Male has a blackish mask. Female is grayer, lacks mask. In autumn, browner. Persistently jerks tail;
no other gray-backed warbler does this.

Listen to the sound of Kirtlands Warbler

North America : Michigan. Dendroica kirtlandii breeds in north and central Michigan, with small numbers (and occasional breeding) in Michigan’s Upper Peninsula and Wisconsin, USA. Breeding was also recorded in Canada in 2007 for the first time since 1945. Breeding habitat has declined by 33% since the 1960s, but is more extensive than the 18 km2 occupied in 1994. It has a very small winter range in the Bahamas and the Turks and Caicos Islands (to UK), either concentrated in the northern islands or spread throughout the Bahama Archipelago.

Young jack pine; winters in dense understory of pines. Breeds only in large stands of young jack pines from 5-25′ tall. Jack pine grows on s
andy soils, and regenerates only after fires. In migration, seen in thickets and deciduous trees. In winter, rarely seen, and only in dense undergrowth of pine forests of the Bahamas.

Males arrive on breeding grounds in mid-May, a few days before the females, and establish large territories. Tends to be loosely colonial (lone pairs are rare), and males tend to return to the same colony in which they previously nested. Males sometimes h
ave more than one mate.
Nest: Placed on ground in sandy soil close to pine. Nest (built by female) is open cup made of grass, sedge, pine needles, oak leaves, lined with rootlets, hair, moss, and fibers.
Eggs: 4, sometimes 3-6. Buff or pinkish white with brown spots at larger end. Incubation is by female only, 13-
15 days; males feed females on nest during incubation. Up to 70 percent of nests are parasitized by Brown-headed Cowbirds.
Young: Fed by both parents. Young leave nest at age of 9 days. Parents continue to feed young up to 6 weeks. Usually 1 brood, rarely 2.

Mostly small insects, some berries.
In summer, eats many insects, including sawfly adults and larvae, grasshopper nymphs, moths, and flies. Adults also feed on pine sap and blueberries. Feeds soft berries to young. In winter in the Bahamas, feeds on insects and small fruits.
Behavior: Forages for insects near t
he ground and in lower parts of pines and oaks. Will hop on ground to probe for insects. Gleans adult insects and larvae from pine needles and other vegetation, and occasionally takes items while hovering. Solitary in its foraging in winter.

Since 1987, conservation action has successfully increased the population of this species. Numbers exceeded 500 singing males in 1994 following doubling of suitably aged habitat between 1987 and 1990. Numbers continue to increase, but its population and range remain small, hence its classification as Near Threatened.
If scrub is the preferred winter habitat, key threats are fire suppression and brood-parasitism by Brown-headed Cowbirds Molothrus ater in Michigan. If Caribbean pine is preferred, habitat loss on the wintering ground is probably more important. The latter is considered likely because of the failure to occupy all breeding habitat, and changes in population have occurred contemporaneously with the degradation and recovery of the north Bahamas pine ecosystem5. Recently however the four-fold population increase between 1990 and 2000, coincident with a tripling of the available habitat through management, would appear to indicate that currently population levels are closely linked to habitat availability. Consequentially, the current breeding range is too large for fire to affect the whole population rapidly.

North-central Michigan, nesting in loose colonies in an area about 100 miles long, 60 mile wide. Winters in Bahamas. Migration:
Arrives on nesting grounds mostly in mid-May, and gradually departs during August and September, migrating to the Bahamas. Almost never seen in migration, probably because of the needle-in-a-haystack challenge of finding such a rare bird.