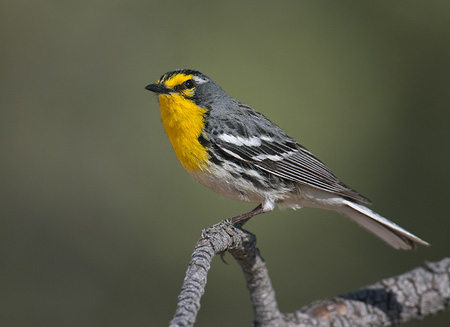 Gray-backed, with a yellow throat, two wing bars, yellowish eyebrow stripe, stripes on sides. Resembles Yellow-throated Warbler, which has a white patch behind the ear.

Listen to the sound of Graces Warbler

Pine-oak forests of mountains. During the breeding season, found mainly in the tops of pines, sometimes also in spruce, fir, and oak thickets from 6,000-
8,000′ elevation in the mountains of the Southwest. In winter in Mexico, inhabits pine-oak woods in the mountains.

Details of breeding behavior are not well known. In the Southwest, arrives on breeding grounds mostly in early April. Males defend nesting territories by singing.
Nest: Placed on a horizontal branch or in the top crown of tree, usually pine, sometimes fir, 20-
60′ above the ground. Nest (built by female) is a tightly constructed open cup made of plant fibers, oak catkins, plant down, and webs of spiders and caterpillars; lined with animal hair and feathers. Nest is often we
ll hidden among a cluster of pine needles.
Eggs: 3-4. Creamy white, spotted with brown around larger end. Details and timing of incubation are not well known.
Young: Nestlings are fed by female, probably by male as well. Age at which young leave the nest is not well known. Normally 2 broods per year.

Presumably mostly or entirely insects. Details of diet are not well known; undoubtedly eats mostly insects, as other warblers do.
Behavior: During the breeding season, often forages by flying
out from the treetops to catch insects in midair. Also searches among branches and twigs and hovers briefly while picking insects from foliage, spending most of its time in the tops of the taller pine trees. During migration and winter, forages in mixed
flocks with other birds.

Grace’s Warblers summer in the south-western United States and northern Mexico and migrate into Central America for the winter, traveling as far south as Nicaragua.