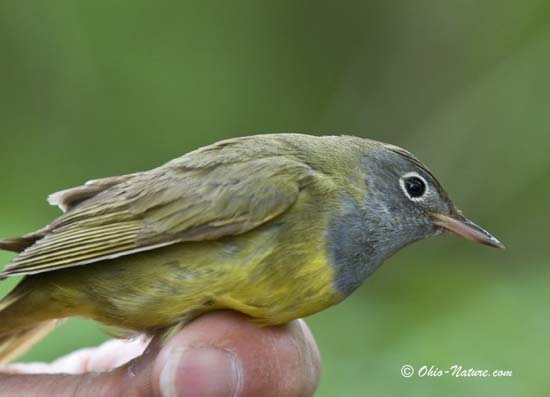 Similar to MacGillivray’s and Mourning warblers (gray hood, yellow and olive body), but note the complete white eye-ring.
Fall female and young are duller and lack the gray hood, but have a suggestion of one (a brownish stain across the upper breast). The eye-ring is always present. This species walks.

Listen to the sound of Connecticut Warbler

Poplar bluffs, muskeg, mixed woods near water; in migration, undergrowth.
In breeding season, in United States and eastern Canada, prefers bogs with black spruce or tamarack. In western Canada nests on dry ridges and in open poplar or aspen stands. In migration, found in undergrowth of lowland woods or in dense thickets in mead
ows.

Details of breeding behavior not well known. Males sing from trees to defend nesting territory.
Nest:
Hidden in sphagnum moss hummock. In poplar woods, placed next to bunch of dry grass or weeds. Nest is an open cup, constructed of leaves, grass, and bark strips, or sometimes a simple hollow in moss lined with finer stems of grass.
Eggs: Usually 4-5. Creamy white, with black, brown, or lilac spots. Incubation period and parental roles in incubation not well known. Apparently only rarely parasitized by cowbirds.
Young: Both parents apparently care for young, but which parent
has most responsibility for feeding nestlings and how long young are in the nest are not well known. Both parents help feed fledglings for some time after they leave the nest.

Mostly insects. Details of diet have not been well studied. Undoubted
ly feeds mostly on insects, as other warblers do. Reported to feed its young on green caterpillars, also observed eating spiders, snails; sometimes eats seeds and raspberries.
Behavior:
Mostly forages by walking on the ground, seeking insects among the leaf litter, sometimes flipping over dead leaves. Also walks along branches, picking prey from crevices in bark. In migration, may forage in small flocks with others of its kind.