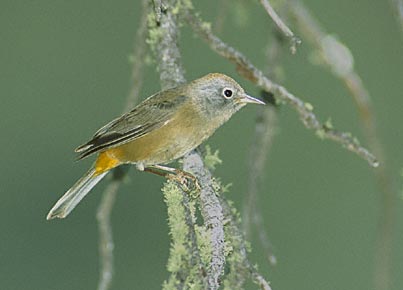 Found in the high Chisos Mountains in Texas. Drab, with a yellow rump and undertail coverts. Larger than Virginia’s Warbler; sides brownish; lacks yellow on the breast.

Listen to the sound of Colima Warbler

Oak-pine canyons. Breeds above 2000 m in montane forests of pine, juniper, oak, and madrone; or in oak-maple-Arizona cypress habitats. Prefers canyons and slopes. In
winter in Mexico, found in humid pine-oak habitat with brushy understory.

Male defends nesting territories by singing and calling; sometimes physically attacks territorial intruders.
Nest:
Placed on ground among rocks on bank of dry wash or at edge of talus slope. Nest is well shaded and hidden in dead leaves beneath grass tufts, rocks, or tree roots. Open cup is constructed of loosely woven, coarse grass and cedar bark strips, dead leaves
, roots, and mosses; lined with fur or animal hair. Pinyon-ricegrass is the favorite nesting material. Nest is built by both male and female.
Eggs: Usually 4. Creamy white with wreath of brown spots at larger end. Incubated by both parents, about 12 days.
Young: Both parents feed nestlings, but males feed less than females, spending more time in territorial defense. Young leave the nest 11 days after hatching, are independent of parents by a few days later.

Mostly insects.
Diet not known in detail, undoubtedly feeds mostly on insects. Wasp galls from oaks, spiders, crane flies, and other flies are among favorite foods early in breeding season. Nestlings are fed many small green moth larvae.
Behavior: Moves rather deliberately while foraging, more like a vireo than like most active warblers. Typically, warblers in this genus do much probing of buds and flowers. In winter
in Mexico, probably defends feeding territories, usually observed foraging alone or in pairs rather than in flocks.

This species is classified as Near Threatened owing to moderately rapid population declines which are thought to be the result of habitat degradation. However, further research may indicate that the decline is not as intense as previously thought and this would lead to it being downlisted.

Breeds in western Texas (Chisos Mountains), north-central Mexico. Winters in Mexico to Colima, Guerrero. Migration:
Only a short-distance migrant, wintering in southwestern Mexico. In Texas, arrives in April and departs mostly in August and early September.