Source to all birds on the Planet
admin
North America, Parulidae, Passeriformes
1 Comment 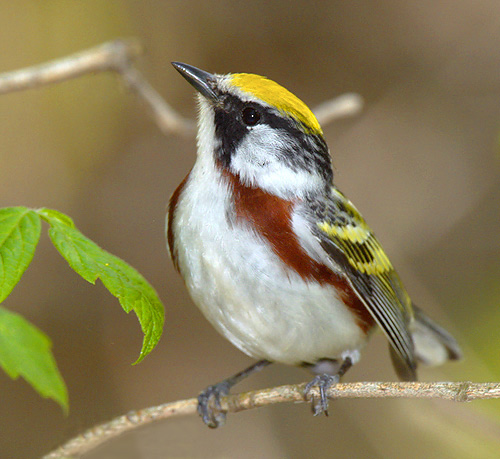 Breeding adults have a yellowish crown, black eye line and mustache mark, dark wings with two pale-yellow wing-bars, chestnut on the sides, white underparts, and a streaked back. Immature (first-fall) birds are much plainer, with a greenish crown and back, gray underparts, and a prominent white eye-ring. Fall adults are similar to immatures but usually show some chestnut on the sides

Listen to the sound of Chestnut-sided Warbler

Before the 1800s, the chestnut-sided warbler was not well known. Because of its highly specialized habitat and foraging techniques, it was believed to be limited to former natural disaster areas such as sites of forest fires. With the clearing of primeval forests and the subsequent growth of shrubby habitats, the chestnut-sided warbler is one of the most abundant breeding warblers in second growth deciduous woodlands.

The chestnut-sided warbler is believed to be monogamous. They can reproduce in their first year. After returning from winter migration and before the females arrive, males establish territory by continuous singing and aggression. Once females arrive, males act very aggressively at first. After copulation, the male follows the female, apparently guarding her. A female constructs a nest entirely on her own in deciduous trees or shrubs. She also incubates the eggs alone. Eggs are laid mid-May to mid-July. On average, there are about four eggs per brood and only one brood is reared per season. Both parents care for the young. At first they feed the young by regurgitation, then as the young become older they are fed small insects. Both parents help in removing waste from the nest.

When they first hatch, the young are altricial. They experience rapid growth in the first week and are capable of flight on the ninth day. They usually leave the nest on the tenth or eleventh day and move to low open thickets where they wait to be fed. They continue to beg for food until they are about one month old.

The chestnut-sided warbler is predominately insectivorous, but will eat some fruit. Each bird forages alone. It searches on the underside of leaves for insects. It hops from branch to branch with its tail cocked.

Neotropical migrant, summering in southern Canada and in the northern and southern U.S. Winters in Central and South America