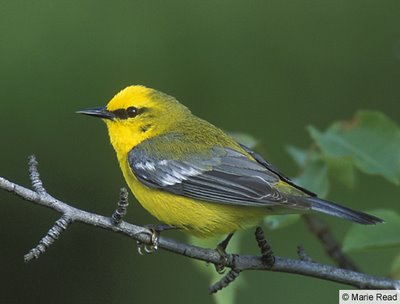 Listen to the sound of Blue-winged Warbler

Brushy hillsides, bogs, overgrown pastures, stream and woodland edges.
Breeds in dry uplands in low shrubbery, brier patches, weed-grown fencerows, and bushy thickets; in neglected fields or at the border of woods. Sometimes found in grasses and weeds near the border of swamps and streams. Occasionally in deep swamp woods.

Hybridizes with Golden-winged Warbler. Hybrids, known as “Brewster’s” Warblers, are fertile, and they backcross with the parent species and with each other; second-generation hybrids include a rare type known as “Lawrence’s”
Warbler. Males sing two types of songs, one in territorial interactions and one in courting a mate.
Nest:
Nest is well concealed in grass or blackberry vines, sometimes under a bush or sapling, close to or on the ground. Attached to upright stems of grass or weeds, especially goldenrod. The bulky nest is a narrow, deep, inverted cone, usually built by the fem
ale alone. Constructed of dead leaves, grass, and beech or grapevine bark, and lined with plant fibers or animal hair.
Eggs: 5, sometimes 4-7. White, with fine brown spots on larger end. Female incubates, 10-11 days.
Young: Both parents feed nestlings. Young leave nest 8-11 days after hatching.

Insects and spiders.
Details of diet are not well known; probably feeds mostly on small insects (adults, larvae, and eggs), including beetles, ants, caterpillars, and grasshoppers, also spiders.
Behavior: Forages by moving about i
n shrubs and trees, often fairly low. Preferred method of foraging is by probing with bill into curled leaves. Also gleans rather deliberately on outer tips of branches, perhaps probing into buds and flowers.