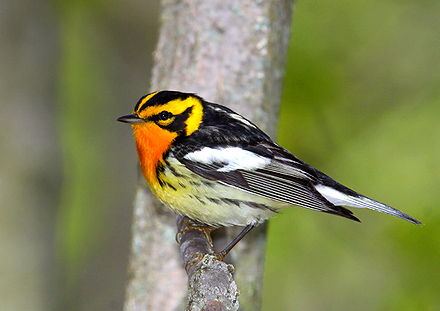 Listen to the sound of Blackburnian Warbler

Monogamous; one brood is raised per year, although a female may lay subsequent clutches if the previous nesting attempts fail. The nest is a dense cup shape, typically located on a conifer limb well out from the trunk. (The hemlock is a frequent choice for the nest site, if these trees are present.) It is constructed of twigs, bark and plant fibers, and lined with lichens, moss, fine grass, pine needles and hair. The female builds the nest. The female lays 3-5 eggs in a clutch. The chicks are altricial at hatching which occurs after 11-12 days of incubation by the female. The female also broods alone. Both parents care for the nestlings and after fledging may divide up the brood. The number of days from hatching to fledging is not known.

These birds are insectivorous, but will include berries in their diets in wintertime. They usually search for insects in treetops.

Long-distance migrant, wintering in Central and South America from Costa Rica south to Venezuela and central Peru. Ecologically restricted in summer and only locally common, but in main wintering area, Colombia, occurs in various forest strata and habitats and is most abundant of Parulidae. Migration mainly along or west of Appalachians, with fewer on Atlantic coast and in south-east states; most birds then cross (rather than fly round) Gulf of Mexico to Central America; spring route is further west than autumn, with yet fewer in south-east USA, and more on western Gulf coast and in Texas.