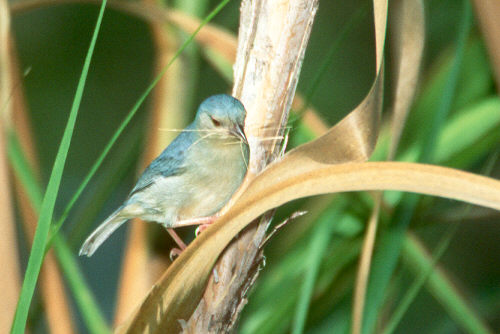 The Bicolored Conebill is 11.4 cm long and weighs 11 g. The adult is grey-blue above and buff-tinged grey below, with red eyes, pink legs and a sharp, pointed bill. The primary flight feathers are bluish with brown edgings. The sexes are similar, although the female may be a little duller, but immature birds are greenish above and have pale yellow underparts.

It is a resident breeder in South America from Colombia, Venezuela and Trinidad south and east to the Guianas, northeast Peru and Brazil.

Its habitat is coastal mangrove swamps and neighbouring woodlands. In Suriname it is almost totally confined to the mangrove along the sea coast and the rivers near the sea.

The small feather-lined cup nest is built in a mangrove tree, and the normal clutch is two brown-blotched buff eggs. Nests are often parasitised by Shiny Cowbirds.

This species has a large range, with an estimated global Extent of Occurrence of 560,000 kmÂ². The global population size has not been quantified, but it is believed to be large as the species is described as ‘frequent’ in at least parts of its range (Stotz et al. 1996). Global population trends have not been quantified, but the species is not believed to approach the thresholds for the population decline criterion of the IUCN Red List (i.e. declining more than 30% in ten years or three generations). For these reasons, the species is evaluated as Least Concern.