Source to all birds on the Planet
admin
Latin America, Parulidae, Passeriformes
Comments 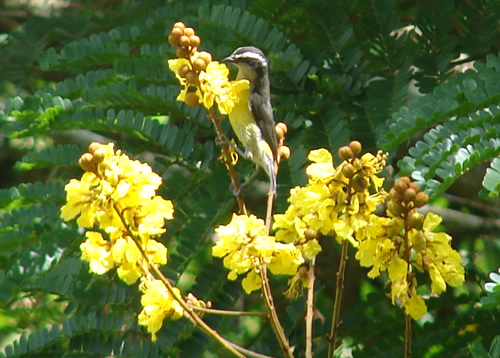 The tiny adult bananaquit ranges from about 10.5 to 11.5 cm in length. It has a dark, slender, curved beak. Although its plumage varies slightly across its geographic range, the adult plumage is nearly sexually monomorphic. In the male, the feathers on the above side are dark gray, while its crown is more black and the underside/rump is bright yellow. A long, prominent, white eyebrow (supercilium) sits directly above the eye and many times a white spot (speculum) occurs on its generally black wings. The throat is a lighter shade of gray than the back and in certain races the tail-feathers are tipped white. The female bananaquit is very similar, except that her crown is narrowly darker, her throat whitish as opposed to gray, and her rump is more of an olive-yellow shade. The young bananaquit has feathers that are far more dull than its parents’ and appear more olive-yellow over its entire body.

Listen to the sound of Bananaquit

It is most often found within the range from southern Mexico to northern Argentina and largely eastward throughout South America. It occupies most of the Caribbean Islands and on rare occasions is found in Florida.

The bananaquit covers a range of habitats within its geographical area. The birds are most commonly found at low elevations and rarely in the high mountainous forests. They are present in open fields, areas of cover, the dense, humid rain forests, and even in certain desert areas.

Territorial and presumably monogamous. Female builds a messy nest of grasses and plant fibers on edge of a branch. Globe nest is typically 5 – 30 feet above ground in a tree or shrub. Female lays three cream or buff eggs with brown spots. Female incubates for 12 – 13 days, both adults tend to altricial young until fledging at 15 – 18 days.

Coereba flaveola, often compared to hummingbirds, takes flower nectar as its primary source of food. Although it does use its sharp beak to pierce flowers from the side to feed, much like some hummingbirds, the bananaquit cannot hover like a hummingbird. For this reason the bird must always perch while feeding and many times hangs upside down from a branch instead of sitting upright. In addition to nectar, it eats a number of other food items that include fruits, insects, and other small arthropods. The bananaquit enjoys many kinds of fruit, including ripe bananas. It may also pick small insects from the undersides of leaves and eats flies, beetles, caterpillars, ants, bees, and spiders

This species has a large range, with an estimated global Extent of Occurrence of 11,000,000 kmÂ². The global population size has not been quantified, but it is believed to be large as the species is described as ‘common’ in at least parts of its range (Stotz et al. 1996). Global population trends have not been quantified, but the species is not believed to approach the thresholds for the population decline criterion of the IUCN Red List (i.e. declining more than 30% in ten years or three generations). For these reasons, the species is evaluated as Least Concern.