Source to all birds on the Planet
admin
Africa, Muscicapidae, Passeriformes
Comments 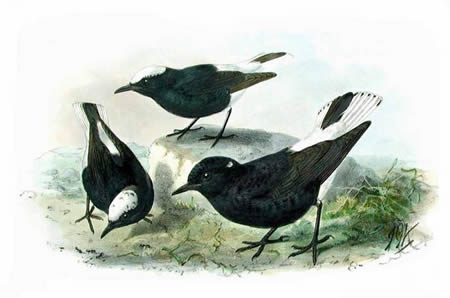 Listen to the sound of White-tailed Wheatear

Across Afro-Arabian lower middle latitudes, Mediterranean to subtropical and tropical. A true Saharan species characteristic of desert with less than 100 mm annual precipitation. Frequents the most impoverished localities, at all altitudes up to 3000 m, especially rocky and sometimes earthen banks of wadis, but also oases.

February-May in North-West African Sahara, March-April in Egypt and Sinai, mid february in Arabia. Nest site is built in hole in rocks, under stones, in bank, or occasionally in wall of building.
Nest is cup of dry grass, lined with wool and feathers, sometimes with base of twigs or bits of wood. 3-5 eggs, incubation 14 days tended by female.

Mainly insects, but diet notably diverse, including plant material and small reptiles. Catches prey in flight, on ground, or in bushes.
Typically perches on low vantage points and drops down or sallies forth, up to 10 m away, to take prey from ground in manner of a shrike. At moment of capture, frequently spreads wings, sometimes repeatedly, perhaps to confuse and entrap prey.

Largely sedentary throughout range, though some individuals or populations may make short-distance movements in winter: thus in some regions of Tunisia apparently recorded most frequently September-February which suggests breeding elsewhere, and at Helwan (Egypt) present only in winter. Single records in Cyprus, March, and Malta, April. Occasional records in Oman, Kuwait, and Qatar are in areas where breeding could occur and need not necessarily indicate movement within Arabian peninsula.