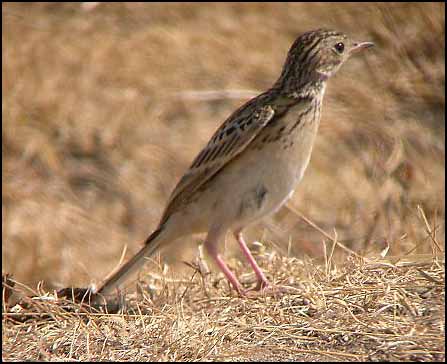 Note the pale flesh or yellowish legs . A buffy sparrowlike bird with a striped back and white outer tail feathers. Suggests Vesper Sparrow or longspur, but with a thin bill. Back streaked
i buff and black , cheeks buffy. More solitary than the American Pipit; when flushed, often towers high in aimless flight, then drops.

Listen to the sound of Spragues Pipit

Male sings to defend nesting territory, spiraling up to 300′ or even higher above the ground, then hovering and circling for several minutes while singing repeatedly.
Nest: Site is on ground in grassy field, usually in slight depression or tucked into the side of a grass clump. Nest (probably built by female) is a woven cup of dry grass s
tems, sometimes lined with finer grass. Often has grass arched over the top, with entrance at the side.
Eggs: 4-5, rarely 3-6. Whitish, heavily spotted with maroon or purplish brown. Incubation is probably by female; incubation period not well known. Adult does not fly to nest, but lands several feet away and walks there.

Young: Fed by female, possibly by male; details not well known. May leave nest as early as 10-11 days after hatching, before able to fly well. 1-2 broods per year.

Mostly insects, some seeds.
Diet is not known in detail. Apparently eats mainly insects, especially in summer, including grasshoppers, crickets, various beetles, moths, and others. Also eats many small seeds of grasses and weeds, perhaps more in fall and winter. Young birds are fed
almost entirely on insects.
Behavior: Forages by walking on the ground, usually among fairly dense short grass, searching for insects and seeds. Forages alone, not in flocks.

This species qualifies as Vulnerable owing to a rapid population decline. The rate of decline in the USA is now not so severe as formerly, but declines may be worsening in Canada.