Source to all birds on the Planet
admin
Australasia, Motacillidae, Passeriformes
Comments 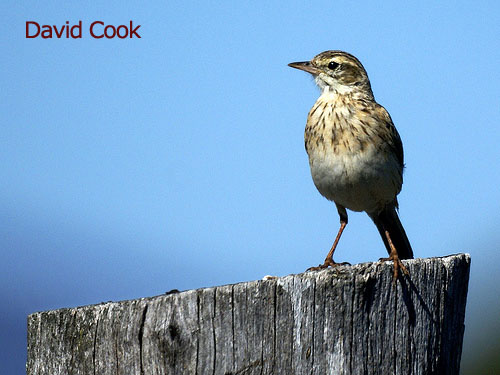 The male has extremely long outer tail feathers which can be longer than its body and are whitish in colour. This female still has a longish tail and she also shows the distinctive rufous collar round the back of the neck.

The Scissor-tailed Nightjar lives at edges of savanna or rocky places where it flies low or waits to sally from open sites. It also occurs on roads in semiopen zones, especially at borders or even into sugar cane fields.

Nest-site among vegetation on rocky hillsides. No nest is built, eggs are laid on bare ground. Male displays courtship on ground by wingclapping an short flights. Clutch size 2 eggs. No further data.

Mainly insects like beetles, grasshoppers and moths. Forages by short sallies from a perched position.

This species has a large range, with an estimated global extent of occurrence of 7,900,000 km2. The global population size has not been quantified, but it is believed to be large as the species is described as ‘frequent’ in at least parts of its range (Stotz et al. 1996). Global population trends have not been quantified, but the species is not believed to approach the thresholds for the population decline criterion of the IUCN Red List (i.e., declining more than 30% in ten years or three generations). For these reasons, the species is evaluated as Least Concern.

It is found in Brazil mainly south of the Amazon River, and in Bolivia, Paraguay, Uruguay and northern Argentina. In Suriname very rre, only found near brazilian border in the Sipaliwini Savanne

Sedentary throughout range, though some migration is reported.