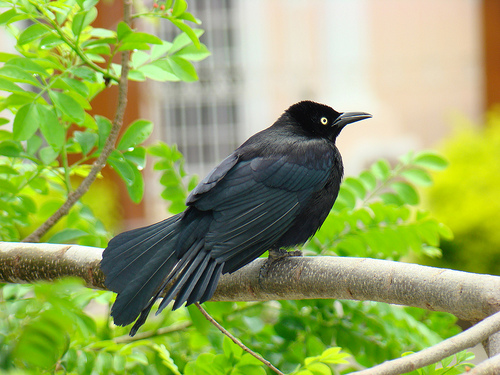 The adult male Carib Grackle is 27cm long with a long wedge-shaped tail, although the latter is not so long as with other grackles. Its plumage is entirely black with a violet iridescence, its eyes are yellow, and it has a strong dark bill. The adult female is 23cm long, with a shorter tail and brown plumage, darker on the upperparts. Young males are shorter tailed than adult males and have some brown in the plumage. Young females are very similar to the adult females.

Listen to the sound of Carib Grackle

The breeding habitat is open areas including cultivation and human habitation.

This is a colonial breeder, with several deep, lined cup nests often being built in one tree. Two to four whitish eggs are laid. Incubation takes 12 days, with a further 14 to fledging. This species is sometimes parasitised by Shiny Cowbird, but is quite successful at rejecting the eggs of that species.

The Carib Grackle is a highly gregarious species, foraging on the ground for insects, other invertebrates or scraps. It can become very tame and bold, entering restaurants to seek food, normally feeding on leftovers. It will form groups to attack potential predators, such dogs, mongooses or humans, and at night it roosts colonially.