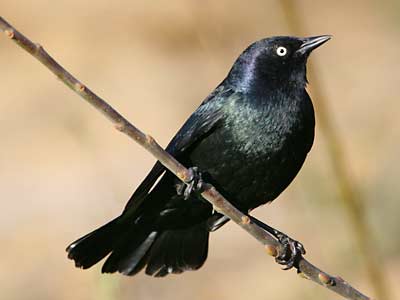 A very common and familiar blackbird in the West. Male: All black, with a whitish eye; in good light, purplish reflections may be seen on the head and greenish reflections on the body.
b Female: Brownish gray, with a dark eye.

Listen to the sound of Brewers Blackbird

Often nests in loose colonies of up to 20-30 pairs. In courtship display (or sometimes in aggressive display), male points bill straight up or forward, fluffs out body feathers, and partly spreads wings and tail.
Nest: Site is quite variable; usually in tree 20-
40′ above ground, but may be on ground among tall grass, in bushes, or in crevice in cliff. Nest (built by female) is a rather bulky open cup made of twigs, grass, weeds, and pine needles, lined with fine grass, rootlets, animal hair. Often has mud or dri
ed manure added to base.
Eggs: 4-6, sometimes 3-7. Pale gray to greenish gray, spotted with brown. Incubation is by female, 12-14 days.
Young: Both parents bring food for nestlings. Young leave the nest about 13-14 days after hatching. 1 brood per year, sometimes 2.

Mostly insects and seeds, some berries. Feeds on a wide variety
of insects, including grasshoppers, crickets, beetles, aphids, caterpillars, termites; also some spiders, snails, tiny crustaceans. Eats many seeds of grasses and weeds, plus much waste grain. Also eats berries, especially in summer.
Behavior:
Walks on the ground as it searches for food. Sometimes wades in very shallow water. Sometimes catches insects in flight. May follow farm machinery in fields to feed on insects turned up by the plow. Except in nesting season, usually forages in flocks.

Southwestern Canada, western and north-central United States. Winters to southern Mexico. Migration:
Present all year in parts of West. Spreads eastward in fall, with winter range including much of Southeast. Migrates north relatively early in spring.