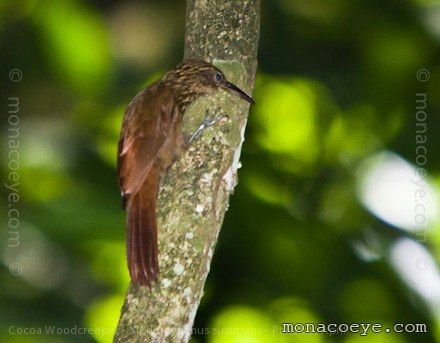 This woodcreeper is 27-28 cm long, and weighs 64g. The head and neck are buff-streaked dark brown, the upper back is lightly streaked dark brown, and the rest of the upperparts, wings and tail are rufous. The underparts are olive-brown with broad cinnamon streaks on the breast. The bill is long, pale, slightly decurved, and hooked at the tip.

It chiefly inhabits humid lowland forest, although habitat preferences vary geographically, and in some areas it can also be found in semi-deciduous and gallery forests, palm swamps, cerrado woodland, mature mangroves, clearings with scattered trees and plantations. It is most abundant below 900 m, although it occurs in small numbers at high altitudes, locally to 2400 m in Venezuela.

The species builds a bark-lined nest in a, usually low placed, tree hole or hollow stump. Clutch size is 2 eggs.

It feeds primarily on arthropods, but also on small vertebrates, taken by gleaning, pecking or probing into bark crevices, dead leafs, clumps of moss or knotholes. It is a regular associate of mixed-species flocks frequenting the mid-levels and subcanopy. It feeds low in trees, usually alone, but groups will follow columns of army ants.