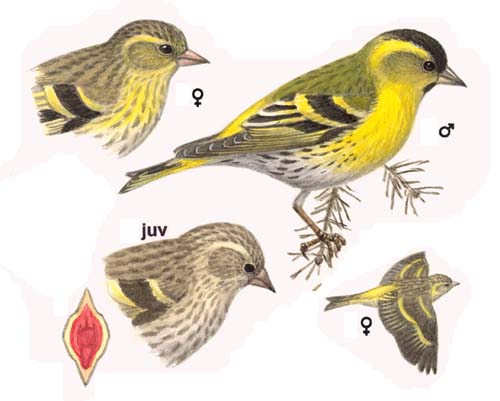 Small, quite tubby but elegant finch with short but noticeably forked tail, sharing with Redpoll arboreal, tit-like behaviour and with serins yellow-green and streaked plumages. At all ages, shows fine bill (like Goldfinch and unlike all serins except Citril Finch) and striking combination of yellow band on wing and yellow basal patches on tail (unlike any confusion species). Male strikingly yellow and green, with diagnostic black crown, much black in wings and tail, emphasizing yellow marks, and greenish-yellow rump. Female more greenish, distinctly streaked above and below, especially from sides of breast to rear flanks. Juvenile buff-brown above, even more heavily streaked above and below; lacks pale rump but shows characteristic wing and tail pattern.

Listen to the sound of Siskin

In west Palearctic, breeds in both lowland and mountain forest, coniferous or mixed, mainly in boreal and temperate zones, north to July isotherm of 13 degrees C. Mainly occupies spruce but also fir and pine, especially where these are well-grown and well-spaced, and sometimes mixed with broad-leaved trees. Streamside locations are often preferred, especially outside breeding season where much foraging is in alders and birches along watercourses, often well away from conifers. Recently has begun to visit garden feeders in some areas. Has in recent years begun nesting more widely and frequently in fresh areas in England, apparently due to afforestation with conifers and to use of planted introduced conifers in parks and gardens, but in Switzerland in formerly neglected native stands, largely in montane regions at c. 1200-1800 m, but not infrequently in lowlands, with marked annual fluctuations.

Seeds, especially of conifers, alder, birch, and herbs; some invertebrates in breeding season. Very dependent on spruce (or pine) on breeding grounds. Feeds principally in trees, moving to tall herbs or ground when cones empty and seed has dropped; many invertebrates apparently taken from ground and at water?s edge; also has habit, mainly in winter, of feeding on seeds washed up on shoreline, where favourite alder trees are common. Invertebrates picked from leaves and needles of trees, herbs, bracken, etc., and insects can be caught in flight. Moves restlessly through trees examining cones, acrobatically clinging to cones and twigs, often starting at crown and moving towards base; hangs and perches on stems and seed-heads of herbs with equal agility. Tweezer-like bill used to extract or pry out (bill inserted then opened) seeds (etc.) from tight spaces (e.g. cones, closed seed-heads, buds, catkins), very like Goldfinch, though unable to probe as deeply. In recent years (in southern England since early 1960s and Ireland since 1980s) frequents bird-tables and garden feeders in winter much more regularly than in past, particularly after alder seed crop exhausted; perhaps first entered gardens to feed on seeds of ornamental cypress, soon regularly taking peanuts. Another habit apparently acquired recently is eating of beechmast, first recorded in central England in 1950s.

Mostly migratory in northern breeding areas, but some southern populations may be resident. Many birds winter in different areas in different years but some are faithful to same areas even exactly the same site. Most are nomadic during winter, but minority becomes resident at same site for several months. Numbers migrating vary greatly from year to year, and more distant movements are recorded when large numbers of birds involved (eruption years). Availability of seed crops on favoured trees (alder, birch) seems to be major determinant of strength of movement away from breeding area. Recent habit of regular feeding in gardens noted particularly in March and early April when birds fattening for spring migration.
Autumn migration in northern areas may start as early as August, but generally peaks late September or October. Timing and strength vary from year to year, and significant numbers may move as late as December or even January. Spring departure from regular southern wintering areas is weak and may start in early February, but in most areas continues to mid-April. Passage in Switzerland from end of February to mid- or late April; peaks in April in northern Denmark. On south side of Gulf of Finland (where passage very conspicuous) and in Leningrad region, waves of migrants pass east or north-east until early or mid-May.