Source to all birds on the Planet
admin
Fringillidae, North America, Passeriformes
Comments 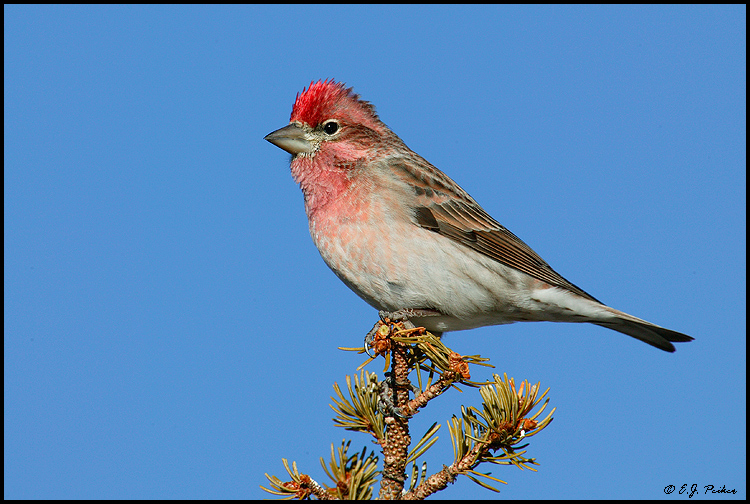 Listen to the sound of Cassins Finch

North America : West, also North Mexico. Carpodacus cassinii is found throughout the conifer belts of North America’s western interior mountains, from southern British Columbia and southern Alberta in Canada, south through the Rocky Mountains of the USA to wintering populations in northern Mexico

Local breeding numbers often change from one year to the next. May nest in small colonies. Male often does not defend a nesting territory, instead simply staying close to female and driving away rival males.
Nest: Usually placed in large conifer, commonly about 30-40′ above ground, may be as low as 10′ or as high as 80′ up; sometimes in aspen or other deciduous tree.
Nest (probably built by female) is open cup made of twigs, weeds, rootlets, strips of bark, lined with fine grass, plant fibers, animal hair, sometimes decorated with lichens.
Eggs: 4-5, sometimes 3-6. Bluish green, with spots of brown and black often concentrated at larger end. Incubation is by female, about 12-14 days. Male often feeds female during incubation.
Young: Both parents feed nestlings. Young leave nest about 2 weeks after hatching, and parents and young may promptly leave nesting area.

Mostly seeds, buds, berries.
Feeds mainly on vegetable material. Buds of various trees are often staple items in diet, also eats seeds of many trees (especially conifers) and some weed seeds. Feeds on berries and small fruits when available. Also eats some insects, perhaps mainly in
summer.
Behavior: Does much foraging up in trees, especially when ground is snow-covered; also feeds in weedy growth and on ground. Except when nesting, often forages in small flocks.

Survey data have shown that this species has undergone moderately rapid declines and therefore it qualifies as Near Threatened.
There is little information on potential threats to C. cassinii, but a preference for open forest habitat suggests that selective logging or small-scale clear-cutting will not be deleterious to this species

Southwestern Canada, western United States. Winters to mountains of Mexico. Migration:
Somewhat nomadic, with numbers present in a given locality often changing from year to year. Irregular in winter occurrence in lowlands, but sometimes wanders well out onto plains.