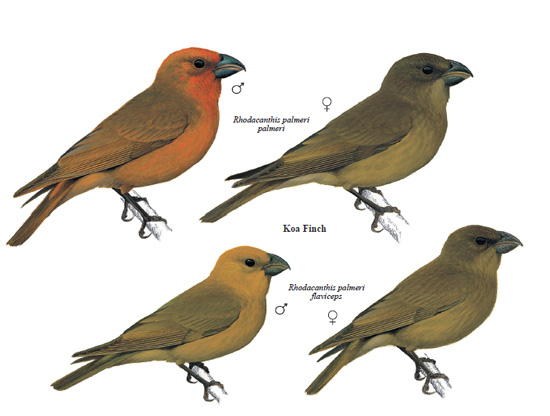 The Koa Finch is something of a mystery. Was it one species or was it two? Were the “Greater” and “Lesser” Koa Finches both members of the same species? During 1891 Henry Palmer was busy collecting specimens on the Hawaiian Islands for Walter Rothschild. The enormously wealthy scion of the famous banking family was at this time frantically acquiring material for his museum at Tring, Hertfordshire, England. Nothing interested him more than rare, extinct and curious birds, and he was later to write his famous book Extinct Birds, 1907. Palmer had been commissioned to sail to Hawaii in search of whatever he could find. He linked up with George C. Munro, and together the two men combed Hawaii.

One of their “finds” was a series of large “finches” that they took from the koa forests in the Kona district of Hawaii. First of all it should be made clear that these were not finches at all; they were Hawaiian honeycreepers that had evolved a finchlike form, in order to exploit a vacant ecological niche. The original collectors, Palmer and Munro, were quite clear in their minds about the nature of the birds they had discovered. They felt that these creatures belonged to a single, rather variable, species, and it is worth noting that the two forms were collected on the very same trees. They then dispatched the specimens of their new bird to Rothschild.

When the preserved specimens reached Rothschild in England, he formed a different conclusion to that of his collectors, and he delightedly separated his new possessions into two groups; nothing pleased Rothschild more than to be able to name a new form! The larger individuals, with more orange heads, he assigned to a new species that he called, in honour of his collector, Rhodacanthis palmeri. To cover the smaller birds with heads that were rather more yellow he proposed the name Rhodacanthis flaviceps. Rothschild identified eight individuals that he felt belonged to this second species, two males and six females. After Palmer’s original collecting success, no further specimens that could be assigned to flaviceps were ever taken or seen. However, the larger birds were observed again, and captured. Over a period of five years a few individuals were encountered. Then these birds vanished too. There is no record later than 1896.

Palmer’s notes were bequeathed by Rothschild to the Natural History Museum, London, but, unfortunately, many of them were destroyed by tidy-minded museum workers, so we will never know exactly what was in his mind. The argument for or against two species is a fairly basic one. Does one agree with the experienced field ornithologists who actually saw the living bird, or does one take notice instead of undoubted differences that were noticed by cabinet naturalists? It is possible that the smaller, yellower birds were immatures or first-year birds, and this idea might tidily explain why they were never encountered after 1891. There were no more immatures because the species was standing at the edge of extinction and no longer breeding properly. The last sighting of the species actually involved an observation of some very young birds but, probably, these did not live long. The big problem with the evidence of the specimens is that is difficult to correlate it with the birds in life. Although the most extreme examples of each form appear to be rather different, there are areas of overlap between some of the other specimens.

The real truth is probably unresolvable, and is simply a matter of interpretation. Unfortunately, knowledge of the living bird in no way matches the amount that has been written concerning the supposed status of the species – or pair of species. The best description of the bird in life was given in 1903 by R. C. L. Perkins, a man who left behind some of the most evocative writings on the extinct birds of the Hawaiian Islands: Although spending most of its time in the tops of the loftiest koa trees, Rhodacanthis occasionally visits the lesser trees…chiefly for the sake of the caterpillars that feed upon them…Its chief food, however, is the green pod of the koa tree, which it swallows in large-sized pieces and its blue bill is often stained with the green juice and fragments of the pods…The song…consists of four, five or even six whistled notes, of which the latter ones are much prolonged…Although the notes are not loud, they are very clear, and…easily imitated…Were it not for this fact Rhodacanthis, when keeping to the leafy crowns of tall koa trees…would be most difficult to get sight of…The green plumaged young…are fed partly on fragments of koa pods.