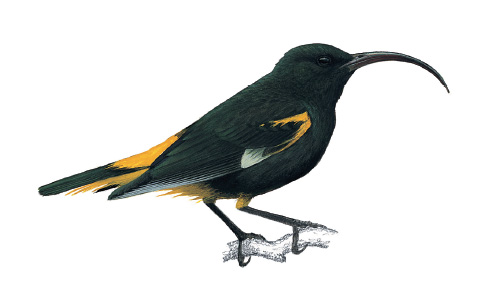 The Hawaii Mamo suffered in the same way and for the same reason as the Hawaii ‘O’o. The rich yellow feathers of the uppertail- and undertail-coverts attracted the attention of the kings and princes of Hawaii, and these feathers were used in the making of ceremonial cloaks and other artifacts. The most famous cloak of all, that of Kamehameha I was made from the feathers of an extraordinary number of birds. An estimate has been made that 80,000 individuals were used before the garment could be brought to completion.

The Hawaii Mamo was one of the first Hawaiian birds to come to the attention of Europeans and specimens were brought back from the Pacific to England by the naturalists who participated in James Cook’s third voyage. Surprisingly little is known of it, however. The birds fed on nectar, particularly from the flowers of arborescent lobelias, but they are thought also to have eaten insects. The call was described as a single, long, rather mournful and haunting note. The species was only ever noticed on the island of Hawaii and it was last seen during 1898.