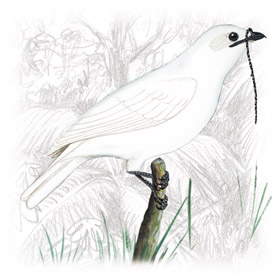 The male White Bellbird is one of the few land birds with an entirely white plumage. The wattle growing from the base of the upper mandible hangs down and is extensible. The female is olive-green above, whitish-yellow with darker streaks below, and lacks the wattle.

Listen to the sound of White Bellbird

It is found in Brazil, French Guiana, Guyana, Suriname, Trinidad and Tobago, and Venezuela.

Adult males of the White Bellbird are sedentary and advertise themselves by loud calls from the same perches in the forest throughout the year except for the molt period. The females, who alone tend the nest, visit the males on their display perches to mate, which is the only association between the sexes. The advertising and courtship behavior consists of calls from high exposed perches above the canopy and also from beneath the canopy. Having attracted a female, the Bellbird courts and mates with her at his perch beneath the canopy.
The nest is loose cup made out of twigs. No further data.

This species is entirely frugivorous, even the nestlings are fed only fruit.

This species has a large range, with an estimated global extent of occurrence of 510,000 km
← Previous Post
Next Post →