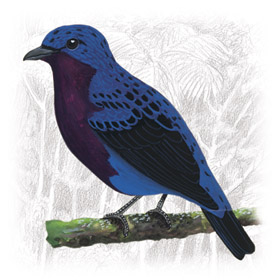 The male is a deeper blue than the Spangled Cotinga (Cotinga cayana) and its purple extends much lower down. The female is dark brown above and light brown below with buffy white edges to the feathers giving an overall scaled appearance.

It is found in Brazil, Colombia, French Guiana, Guyana, Peru, Suriname, and Venezuela

Its natural habitat is subtropical or tropical moist lowland forests. It seems to have a preference for being close to sandy-belt forest or savannah forest.

It feeds almost exclusively on large fruits and is usually seen in the early morning perched high near fruiting trees.