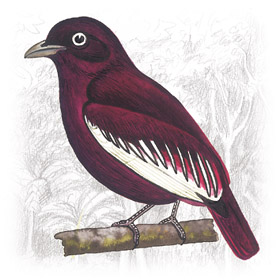 The male has a deep claret-purple colour, darker on the head. The wings are mainly white and the purple scapulars extend over the white wings to form a deep fringe. The iris is pale yellow. The female has a fairly uniform grey plumage with white edging to the wing feathers.

Listen to the sound of Pompadour Cotinga

Its natural habitat is subtropical or tropical moist lowland forests. It is found in the canopy of humid forest and seems to be more numerous in areas of sandy soil forest.

It gathers in small groups in fruit trees and for mating ceremonies during the mating season. It builds a fragile, open-air nest and lays only one egg at a time.

This species has a large range, with an estimated global extent of occurrence of 3,600,000 kmÂ². The global population size has not been quantified, but it is believed to be large as the species is described as ‘frequent’ in at least parts of its range (Stotz et al. 1996). Global population trends have not been quantified, but the species is not believed to approach the thresholds for the population decline criterion of the IUCN Red List (i.e., declining more than 30% in ten years or three generations). For these reasons, the species is evaluated as Least Concern.

Sedentary throughout range, but wanders in search of fruit.