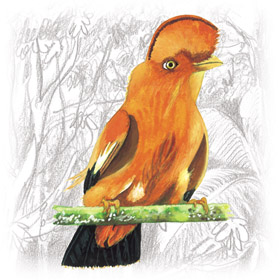 The orange-plumaged Guianan Cock-of-the-rock, Rupicola rupicola is a stout-bodied passerine with an extraordinary half-moon crest, an orange-tipped black tail, black, orange and white wings and silky-orange filaments of the inner remiges. As though not enough orange for one bird, this species also has orange bill, legs and skin. The less conspicious female is dark brownish-grey overall, has a yellow-tipped black bill and a smaller crest.

Listen to the sound of Guianan Cock-of-the-rock

The preferred habitat is humid forest near rocky outcrops. The Guianan Cock-of-the Rock is found in the ancient, highly eroded mountains east of the Andes and north of the Amazon River, in the Guianas and adjacent areas of Venezuela, Brazil and Colombia.

Male cocks-of-the-rock clear spots on the forest floor to form large leks where they sing loudly and perform mating dances for females. Predators such as hawks, jaguars, ocelots, and boa constrictors are attracted to these leks. Successful males will mate with many females during the breeding season. Females raise their young alone, building cup-shaped nests of clay and plants along rock faces or in holes on cliffs. They lay two eggs that hatch in about a month.

Cocks-of-the-rock prefer fruit and berries, but will eat insects if other food is scarce