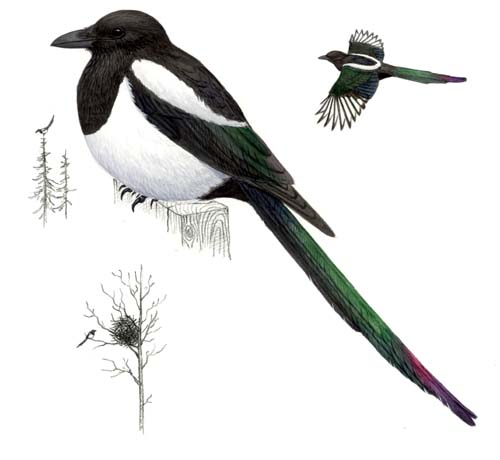 Magpie is a black and white bird, with long tail. Adult has black head, chest, back and vent, with iridescent metallic blue-green wings and tail. It has large white patches on scapulars and white markings on primaries visible on extended wings. Belly is pure white. Tail is long, graduated, with a glossy purple band near the tip. Strong bill is black. Eyes are dark brown. Legs and feet are blacks. Both sexes are similar in plumage, but male is larger than female. Juvenile resembles adults with duller plumage, less glossy feathers and shorter tail.

Magpies are monogamous and form long-term pair bonds. Pairs first form in the fall or winter within wintering flocks. They often nest in small, loose colonies, but this may be more a factor of the distribution of trees for nesting rather than true colonialism. Both sexes help build a huge nest in the branches of a deciduous tree. The nest is used in succeeding years by many other species, e.g., owls. The nest itself is enveloped in a large (up to three feet in diameter), dome-shaped, stick canopy, with entrances on both sides. Inside the stick canopy is a cup-shaped nest with a mud or manure base and a lining made from weeds, rootlets, hair, and grass. The female lays up to 9 eggs, but the typical clutch ranges from 6-7 eggs. The male brings food while the female incubates (for about 18 days). Both feed the young after they hatch. The young leave the nest at 3-4 weeks, and join with 2-8 other broods. The parents feed their own fledglings in these groups for another 3-4 weeks.

Magpie is omnivorous, feeding mainly on insects. But it also consumes conifer seeds after breeding period. It may eat berries, nuts and other seeds in winter. They also eat carrion, chicks and eggs in other species nests, and small rodents.

Sedentary, with limited dispersal, chiefly in north of range. Most ringing recoveries over 30-40 km involve birds from northern Europe, and show no preferred direction. Reluctant to cross sea. 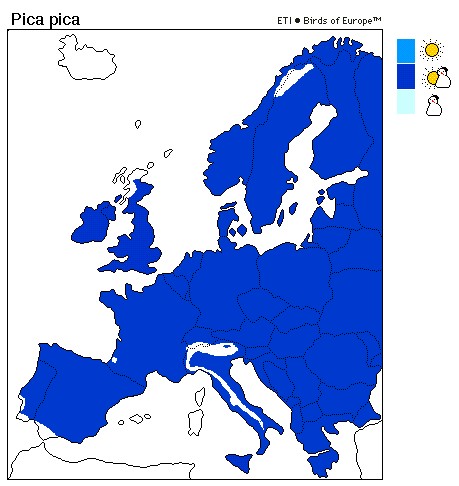